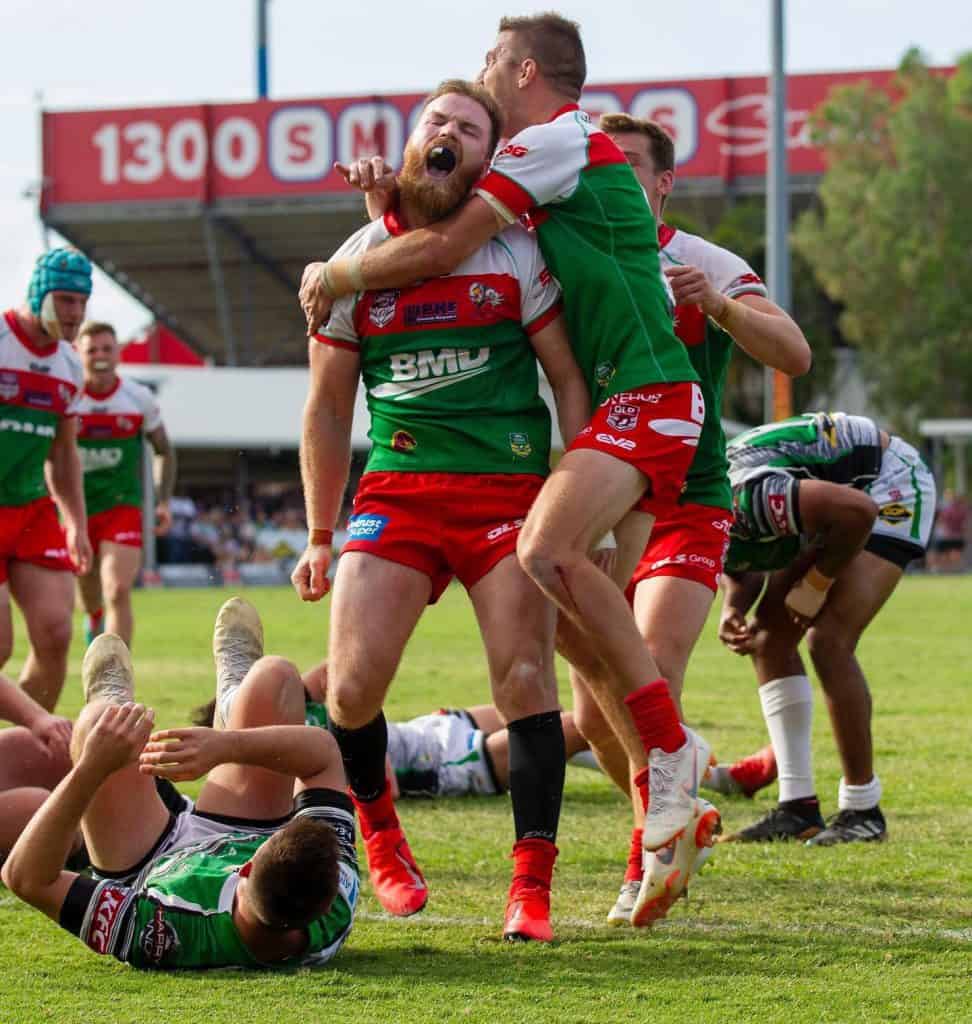 The Wynnum Manly Seagulls scored five tries to two to post a 26-14 win and knock the Townsville Blackhawks out of the Intrust Super Cup finals.

The win sees them earn their place in next Sunday’s Intrust Super Cup grand final at Dolphin Stadium.

A large crowd turned out to watch the Mendi Blackhawks, but ultimately they couldn’t get their team over the line.

Wynnum Manly started the game running into a strong wind, however got on the front foot early through a try to Sam Scarlett in the third minute.

The Seagulls continued to dominate possession and field position with Jordan Drew held up over the line in the 15th minute after a promising raid.

Eventually, the weight of possession took its toll on the Blackhawks in the 22nd minute, when a Pat Templeman kick took a deflection for him to regather and send to winger Ed Burns who planted the ball down.

Not long after in the 27th minute, Templeman continued to torment the Blackhawks, this time by intercepting a pass to streak away under the posts. His first conversion of the day had the Baysiders up 14-0.

Wynnum continued to press before halftime, resulting in frustrations for the home side, with Kalifa FaiFai-Loa being sin binned in the last play of the half.

The penalty attempt from Templeman hit the upright, leaving Wynnum Manly up by 14 points at the break.

The Blackhawks started the second half with a fierce determination to rectify their first half problems, and were rewarded early when Bacho Salam scored from a deft kick from Shaun Nona, who added the extras to reduce the deficit to only eight points.

Despite creating some opportunities, the Blackhawks could not take advantage and were further on the backfoot when former Blackhawk Drew crossed in the 55th minute, with the conversion from Templeman taking the margin out to 14 points once again.

In the 65th minute, a typical charge from dummy half by Josh Chudleigh saw him over the line. The conversion from Nona had the score 20-12 and the crowd had their voice back.

A penalty from Nona three minutes later further reduced the lead and the Blackhawks faithful were out of their seats.

A one-on-one strip from Murray Taulagi saw him set sail on an 80-metre dash, only to see the desperate cover defence of Wynnum in the form of Scarlett force him over the touchline only inches from the try line.

It ended up being the last chance of the season for the Blackhawks.

Wynnum fullback Edene Gebbie scoring in  the 79th minute to seal a memorable victory for the visitors.

“We created plenty of opportunities, and unfortunately we didn’t take them,” Payne said.

“In typical Dan Beasley fashion he was rock solid, and it was disappointing for him to go out that way.

“He’s certainly left this place a better place and left a legacy that will last forever.

“We can definitely take a lot of positives out of this season and will come back and re-group and start again next year.”

The Gulls, who finished the season in second place on the ladder, will watch tomorrow’s game between the Burleigh Bears and Sunshine Coast Falcons with interest to see who they will face in the decider next Sunday.