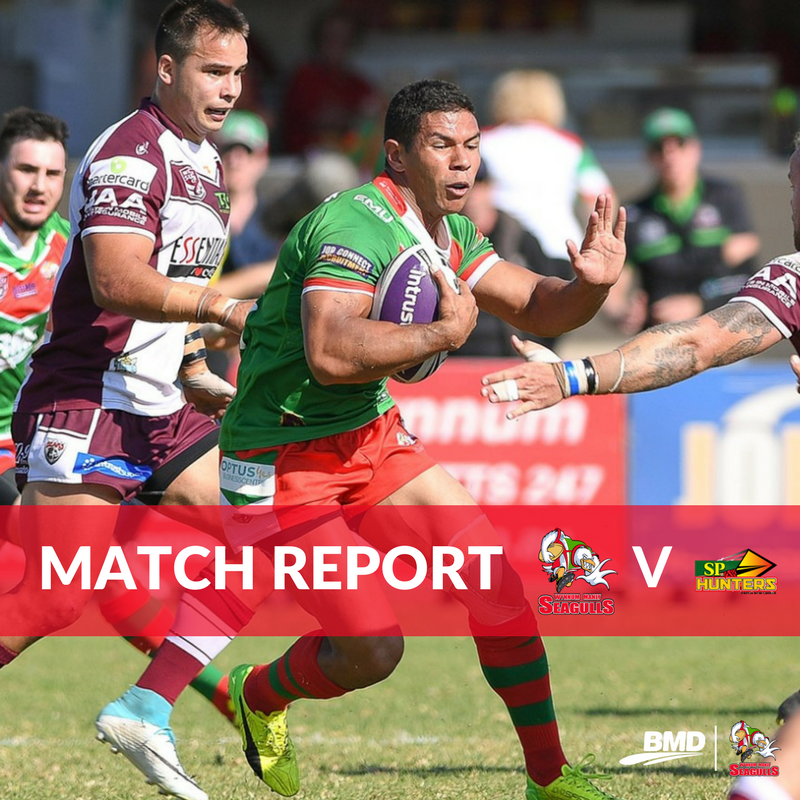 The PNG Hunters secured the 2017 Intrust Super Cup minor premiership after defeating Wynnum Manly Seagulls 28-22 in their Round 24 clash at the National Football Stadium yesterday.

However, it was a tough game for the home side and the visitors were first side to score through fullback Paora Kemp after an impressive backline play. Shaun Nona missed the conversion attempt and the Gulls led 4-0.

Hunters hit back thanks to they try-scoring fullback Stargroth Amean who crossed over after receiving an inside pass from Ase Boas. Boas was able to convert the try to give his side the lead.

The Seagulls went over to score again through PNG international David Mead who showcased his class by beating the Hunters defenders to score. Nona converted the try as the visitors retook the lead 10-4 which they held at the halftime break.

In the second half, the Hunters forwards – led by Nixon Putt and David Loko – caused problems for the Seagulls on the edges; while Israel Eliab continued to show his impressive form. He beat a number of defenders to score in the corner with another try for the Hunters, but this time Boas missed the conversion.

The Hunters scored again soon after through forward Putt who muscled his way over and Boas slotted the extra two points.

The Seagulls tried their best to stay in the contest with Nona calling the shots. They soon scored through captain Mitchell Frei who went over with 20 minutes remaining before fulltime.

With scores level at 16-16, both sides were chasing points – but it was Hunters in form fullback Amean who scored to boost the morale of his team-mates and Boas converted the try.

Hunters play maker Boas scored again in the 69th minute to put the icing on the cake.

However, the Gulls had one more shot and Mead – who was influential for his side all game – scored again with less than 10 minutes remaining before fulltime. The visitors tried a late comeback, but, time was against them as the Hunters held on to win and claim their maiden minor premiership.

Next week, the Hunters travel to Tweed Heads to take on the competition’s other Seagulls, while Wynnum Manly will be away to the Norths Devils.

This story was originally published at: http://www.qrl.com.au/news/2017/08/21/hunters_claim_minor_.html