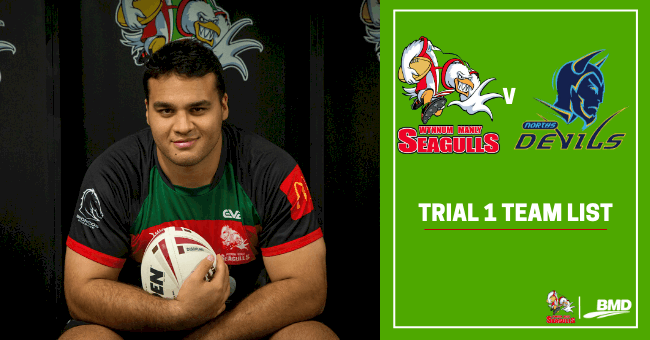 New Seagulls recruit Lloyd Perrett has been named to start in the front row for the Seagulls’ opening trial match against the Norths Devils this Saturday night.

The front row forward will be looking to get some vital minutes in the middle of the park over the trials before the regular season kicks off in a month.

Head Coach Adam Brideson is holding back a number of senior players for the first trial but live game action is important for Perrett who is returning from groin injury.

“Lloyd has had a groin issue over the preseason which has restricted him for a period.

As he missed out on that training load pre-Christmas, it is better for his preparation to get as many minutes into him on the field before we play Burleigh in round one.

The same goes for Francis Tualau (who will also start in the front row) who missed training time with an ankle injury.

This trial is an opportunity for the younger players in our squad to get some time at Intrust Super Cup level and test themselves against a good Norths club.”

Please note that due to weather conditions, all matches have been transferred to Bribie Island Rugby League Club. Under 18s will kick off at 4pm, Under 20s at 5.30pm and Intrust Super Cup at 7pm. The Intrust Super Cup game will also be shown live and free on Strudwick’s Tree Lopping SeagullsTV.