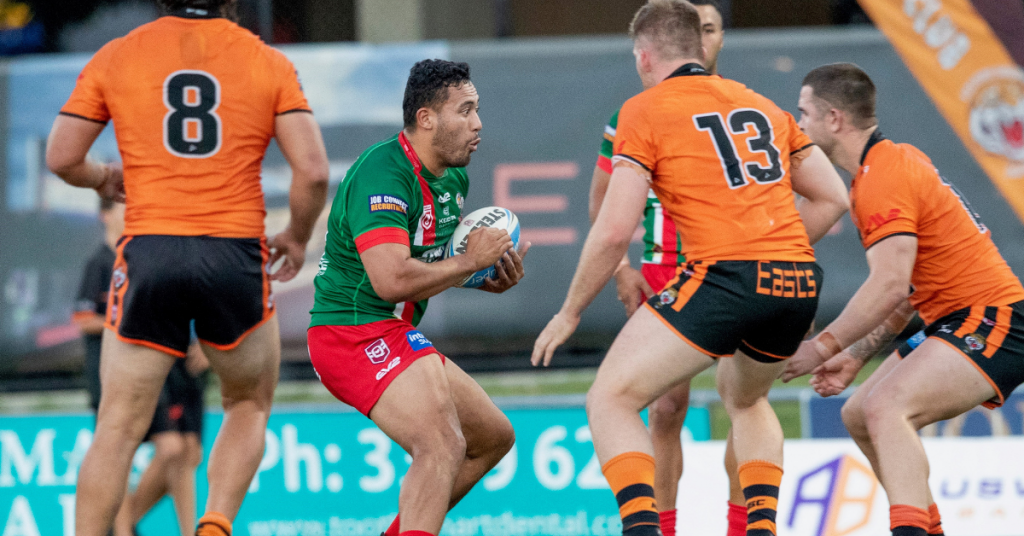 The Wynnum Manly Seagulls produced a strong defensive display but hurt themselves with too many errors as the Brisbane Tigers won the Charity Cup 20-8 at Totally Workwear Stadium.

Despite the disappointing score line and completion rate, Head Coach Adam Brideson would have taken positives from the defensive willingness and work ethic by his charges given the weight of possession held by the Tigers.

It was a folly of their own making, as the Seagulls will need to improve their ball security greatly and complete at a much higher rate when they take on the PNG Hunters in their Round One clash on Saturday 20 March.

A strong crowd was in attendance for the annual charity match to raise money for Livin’ and Men of League, the selected charities for the Tigers and Seagulls respectively.

The Tigers opened the scoring in the 14th minute when Melbourne Storm hooker Aaron Booth put a deft kick into the corner for winger Linc Port to put down.

Booth was not able to convert from the sideline and the score was 4-0.

After some griding football, two minutes before half-time the Seagulls were able to level the scores when Sam Scarlett found Delouise Hoeter on a long ball, and the Queensland Residents centre stepped his way in to score.

Kauri Aupouri-Puketapu couldn’t land the conversion and the score was 4 all at halftime.

The Tigers pushed into the lead in the 46th minute, when livewire fullback Michael Purcell found Conor Carey with a cut-out ball for the winger to score unmarked in the right corner.

Brayden Torpy missed the conversion and the Tigers led 8-4.

Six minutes later, the Tigers extended their lead when half Gerard Beale on the last tackle rolled the ball into the in-goal for a charging Kea Pere to pounce on.

Purcell was successful with the conversion and the score was 14-4.

The Seagulls gave themselves hope in the 56th minute, when the same combo of Scarlett and Hoeter combined again.

After collecting a multi-player cut-out pass, the star centre came off his right foot to cut inside the sliding defence and slam the ball down.

Junior Pauga could not convert the try and the Seagulls trailed 14-8.

In the 63rd minute, a deep kick by Torpy had the Seagulls back three in trouble, and after a Seagulls fumble, Carey was able to poach the football and nab his second.

Booth made no mistake with the extra points and the Tigers completed the trial victory 20-8.