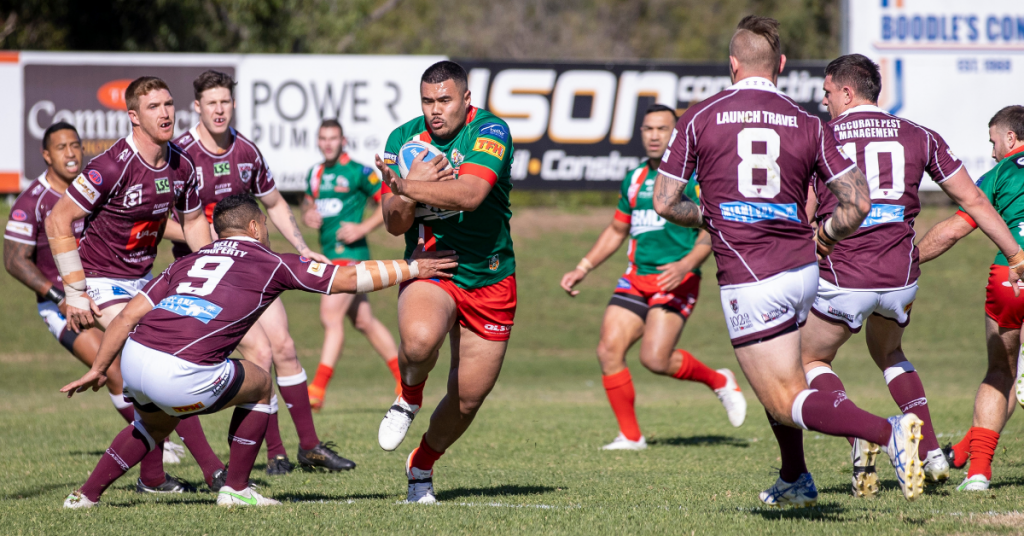 Driving into the town of Chinchilla, nearly four hours west of Brisbane, the tallest structures in the city are the giant grain silos on the right hand side of the main road.

Tucked behind those silos is the quaint Bulldog Park, a well-maintained country footy ground that is the centre of sporting excellence for the district – and where Wynnum Manly Seagulls skipper Sam Scarlett plied his trade as a youngster.

The clubhouse walls are adorned with the past and present best players in the district with an Australian representative among them.

Today this well-maintained ground hosted the Wynnum Manly Seagulls squaring off against their most recent nemesis, the Burleigh Bears.

Weather was perfect for football with warm winter sunshine lapping the backs of a very healthy crowd of locals who came to watch the boys from the big smoke fight it out.

For the first 20 minutes, the crowd was treated to a relatively dower defensive battle between the two. With just a penalty goal kicked by Jack Campagnolo in the sixth minute separating the two teams.

Right on 25 minutes, Burleigh’s Andre Niko crashed over from out wide for a try which was not converted and the Bears were up 4 -2.

The toughness of the defensive battle was evident when Aaron Rockley performed a crunching tackle which left him staggering back into the defence line, only to be replaced for a HIA assessment. He would later return to the field.

Then just before half-time, Max Elliot who had come off second best in a physical challenge, returned to the field after his own HIA assessment. He took the ball from a crisp Jayden Berrell pass and crashed over for a try in the 41st minute for a try and Campagnolo duly slotted the extra points and Wynnum were up 8-4.

Not to be out done, Burleigh were in again from a Kurtis Rowe try and Josh Rogers slotted the extra points and Burleigh were ahead 10-8 after 48 minutes and would never be headed again in the came.

Nine minutes later Andre scored close to the posts and Rogers converted and the Bears were up 16-8.

Two minutes later, Burleigh were in again after some silly mistakes from Wynnum gave possession to Burleigh and Sami Sauiluma crashed over out wide and Burleigh were up 20-8.

Then owing to some individual brilliance from Wynnum’s Delouise Hoeter forcing his way over close to the points giving Campagnolo an easy conversion the Seagulls had closed the gap to just six points and the crowd thought the Seagulls were in with a chance only six points behind at 20-14.

However the Bears quickly snuffed that when Conor Carey scored in the 67th minute and Rogers converted and the Bears had an unassailable lead 26-14 with just 12 minutes to go.

Richie Kennar barged his way over the line in the 78th minute to make the score look respectable at 26-20.

Wynnum were out muscled around the ground and were constantly turned around by the Bears’ strong kicking game and physicality.

A visibly disappointed coach Adam Brideson said Burleigh deserved the result stating “we have a lot to work on if we are going to have a decent tilt and the finals”.

The Seagulls face Northern Pride next week at Pinklands Sport Complex in the Redlands for our Deadly Choices Indigenous Recognition Match.