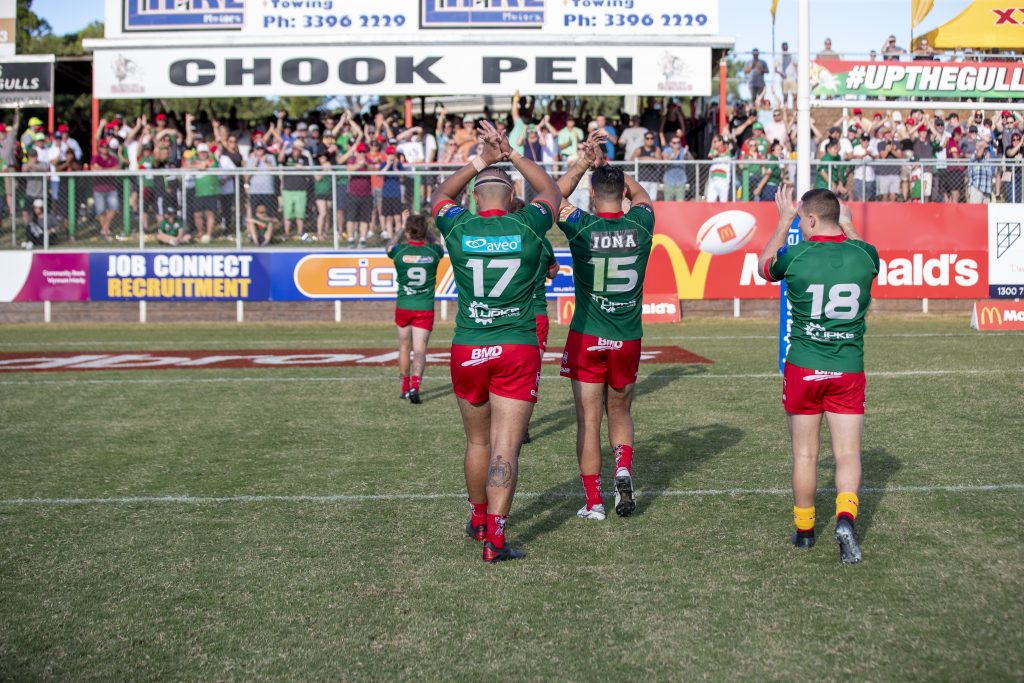 For the first time in 19 months, the Wynnum Manly Seagulls had the chance to run out on their beloved home ground of BMD Kougari Oval and they rose to the occasion for the XXXX Rivalry Round match against Redcliffe Dolphins, holding on for a 34-28 win.

The Wynnum Leagues club had been undergoing a major redevelopment which saw the entire playing field moved east by nearly 50 metres and prior to kick-off, the club held a formal opening ceremony which acknowledged the history of the bayside club.

Special guests Mick Power of BMD and Queensland legends Wally Lewis and Gene Miles spoke of the history of the club and their association with it, with Lewis saying his Wynnum Manly premiership team was one of the best he played in.

The day held even more meaning for the home side, with a poignant minute silence held for former players who passed away last year, with special mention of former club captain Mitch.

With the emotion behind them, Wynnum Manly played out of their skin to start the game.

Skipper Sam Scarlet crossed the line in just the fourth minute and the try was easily converted by Jack Campagnolo.  Two minutes later, Junior Pauga scored and the try was also converted – seeing the Gulls go out to a flyer.

They were in again soon after, thanks to young excitement machine Selwyn Cobbo who scored out wide to put the home side up 16-0 inside 10 minutes.

After some early and costly errors, the Dolphins however regained their composure and started to string some good mistake-free footy together, which saw them score via a Reece Walsh try that the new New Zealand Warriors signing also converted.

As has happened in previous games this season, mistakes crept into the Seagulls games and the Dolphins pounced, with a Eliesa Katoa try just before halftime being converted by Walsh to see the teams head to the sheds with Wynnum Manly leading 16-12.

The Seagulls started their second half much like their start in the first half with a great line break by Pauga who went on to score a great try. Campagnolo slotted the extras and the Gulls were out by 10 points.

The Dolphins hit back and scored in the next set of six with Josh Beehag, who was making his first appearance for the season, breaking the line near the halfway and going on to score. Hayze Perham converted and the Dolphins had closed the gap to four points.

A tough defensive battle ensued with neither side giving an inch until Scarlett, in just his second game back from injury, scored the second of his three tries in the 51st minute; taking the score after the conversion 28-18.

The talented halfback was so fully committed to touching the ball down in the in goal that he almost knocked himself out. He went off for a HIA and was passed fit to come back on which proved good fortune for the Gulls who at this stage of the game looked to have secured a comfortable win.

However, the Dolphins still had plenty to say and came roaring back into the match with another Beehag try from distance, which was converted, and the Dolphins were again back to a four-point margin.

The Dolphins drew level on the 62-minute mark via a Trai Fuller try, but the conversion was waved away, setting up an exciting last 15 minutes.

Wynnum Manly dug deep though, spurred on by the memory of their beloved former skipper Cronin, with many players attending the unveiling of his gravestone yesterday.

The team lifted, and players player Scarlett scored the match-winning try after following up a Delouise Hoeter line brake scored from 20 metres out.

After the game, both coaches commented on what a great game of football it was, with the match ensuring the classic rivalry would continue.