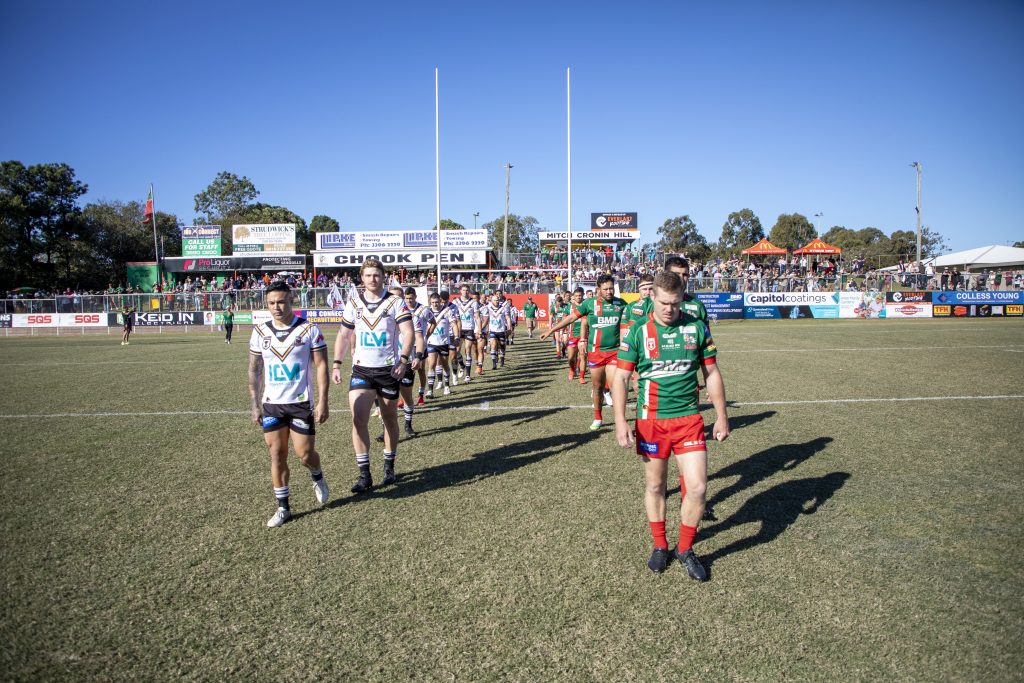 Both teams walked onto the field in unison in front of the Chook Pen and the newly unveiled Mitch Cronin Hill. The procession, including former teammates from across Cronin’s footballing career, linked arms to watch a video tribute in honour of the club legend.

You could have heard a pin drop as the crowd stood and observed one-minute of silence to remember a great footy player and amazing human.

From the kick off, the gravity of the game was clear and both teams had come to play.

It was a tight defensive game for the first 10 minutes before Brisbane Broncos star Corey Oates crossed over out wide for a try to put Souths Logan Magpies on the front foot, 4-0.

Their lead was short lived as big Max Elliott barged over close to the sticks and Jack Campagnolo slotted the conversion and the Seagulls were on the board, 6-4.

Just on the 20-minute mark Jayden Berrell jumped on a mistake by Ethan Quai-Ward and forced his way through three tacklers to score next to the posts. Campagnolo slotted the conversion and the Seagulls were out to a 12-4 lead.

The next phase was dotted with errors and penalties from both sides, which kept the game mid-field.

Lachlan Cooper took advantage of a ruck infringement penalty to score out wide and Isaiah Tass slotted the conversion and the Magpies were only two points adrift of the Seagulls.

Then right on half-time Quai-Ward made up for his earlier lapse by crashing over for a strong try, which Tass converted. The Magpies were off to the dressing sheds 16-12 up.

One minute after the restart, perennial finisher Ed Burns gathered a Sam Scarlett bomb and crashed over out wide to tie up the game at 16-16. Five minutes later Seagulls work horse Francis Kalisolaite-Tualau used his formidable frame to power to the line and extend his arm placing the ball on the line for a great try. Campagnolo converted and the Seagulls had the lead again, 22-16.

Ten minutes later, a professional foul saw Zeb Taia sin-binned, giving the Magpies a distinct advantage. They capitalised with a Cooper try that was converted by Tass to lock up the scores at 22-22.

Cooper would go on to put in a Hastings Deering player of the match performance and really moved his team around the park effectively. This kept Wynnum on the back foot for much of the second half.

In the 62nd minute, Christian Hazard was penalised and put on report for roughing the kicker and given the closeness of the game, the Seagulls took the penalty and moved ahead 24-22.

Just three minutes later, the Chook Pen erupted when popular forward Matiu Love-Henry crossed to score. He capitalised on the momentum after some great one-off-ruck play by the Seagulls turned the Magpies around and had them back peddling. The conversion was missed and the score was 28-22; Wynnum and the crowd were starting to feel like the Seagulls were home.

The Magpies kept the pressure on and kept coming, with their hard work rewarded with a Ezra Mam try on 69 minutes. Tass converted and the scores were locked again at 28-28.

With five minutes left Jack Campagnolo slotted a field goal from 35 metres out and and Wynnum were up 29-28.

With two minutes left Oates retrieved a Scarlett bomb and ran nearly 50 metres before being brought down by a great tackle by fullback Ben Farr.

Two tackles later and in the 79th minute, Oates was on the receiving end of a pass that saw him score in the corner, breaking the hearts of the Wynnum side 32-29.

The Cronin family presented the trophy to the victorious Magpies and both clubs enjoyed a meal with the family after the game.

Coach Adam Brideson remarked “it was a great game of footy, played in the right spirit by both teams with Souths been better on the day and deserved the win”.

The Seagulls are back at home on Sunday June 20th to take on the Brisbane Tigers.