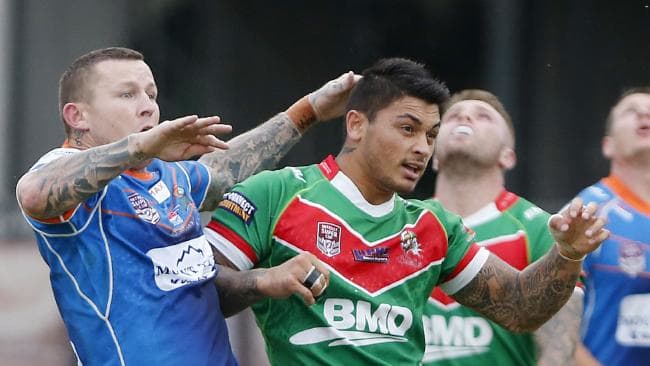 PRIDE No.7 Jake Clifford has stolen the show in Todd Carney’s return to Australian rugby league but Wynnum-Manly spoiled the party in their relocated Intrust Super Cup match on Saturday.

At a greasy Langlands Park, Tully star Clifford scored a double but it was in vain as the Seagulls came home with a wet sail to claim a 24-12 win in the Round 1 clash.

It was a mixed day for former Dally M winner Carney, who showed his value guiding the play around in his first rugby league game in Australia in four years

A first-half kick out on the full was his only blemish among limited opportunity as the Seagulls enjoyed the lion’s share of possession throughout the match.

Wynnum-Manly captain Mitch Frei crossed in the sixth minute to open the scoring before Jake Clifford stepped his way through in the Pride’s second set of the game in the 11th minute.

After enjoying some solid field position the ‘home’ side looked set to take the lead but on two ocassions players were pulled up for incorrect play the balls.

Wynnum was camped on the attack for much of the last 20 minutes but some outstanding goal-line defence from the Pride kept turning them away, while two bombed tries added to the frustration

Carney nabbed an 8-6 lead for his side after a penalty goal in the 27th minute and they could have gone further ahead had Cowboys-contracted winger Murray Taulagi not coughed up the ball in sight of the tryline on the stroke of half-time.

The Pride’s first set after half-time proved lucrative when Carney drew defenders and found Clifford, who poked through a cross-field grubber and was there to dive on it when Seagulls winger Peter Gubb failed to clean it up.

But the momentum was lost four minutes later when a Patrick Templeman got a lucky ricochet off a Pride player and another fortunate bounce to elude Taulagi before the ball ended in the hands of Daniel Ogden for Wynnum to score.

Shaun Nona nailed the conversion to square it up and by the 54th minute the Seagulls were in the lead.

After a quick play-the-ball from teen sensation Payne Haas, Templeman hit Michael Dobson with a well-timed pass, allowing the halfback to slice through out wide and another Nona conversion made it 18-12.

The Pride began to look tired as the first-half defensive work and possibly the long day of travel took its toll in a sloppy next 20 minutes from both sides.

Seagulls forward Max Elliott sealed the 24-12 win when he crashed over in the 77th minute.

Clifford starred for the Pride alongside a huge performance from prop Will Bugden returning from a knee injury and top efforts from Nathan Wales, who started the match, and Troy Kapea off the bench.

The Pride will regroup to take on defending Intrust Super Cup premiers PNG Hunters at Barlow Park next Saturday.