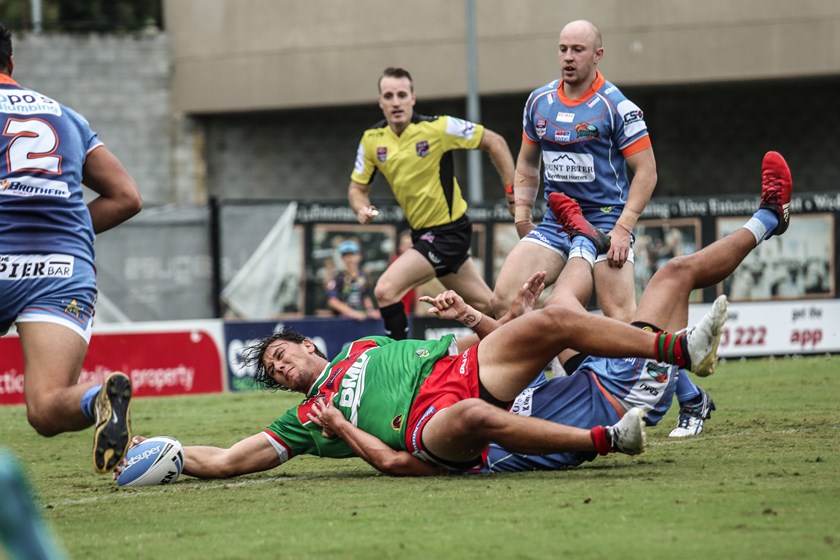 Despite the slippery conditions, the BMD Wynnum Manly Seagulls started 2018 strongly with a 24-12 victory over the Northern Pride on Saturday at Suzuki Stadium, Langlands Park.

The Pride had a tumultuous few weeks of preparation, with one trial cancelled and their home opener following suit after Cairns’ flooding had the game moved down to Brisbane and the rain and wind appeared to have followed them down to south-east.

However, returning Seagull playmaker Patrick Templeman utilised the latter to land a 40/20 kick to put his side into an early attacking opportunity. Captain Mitchell Frei seized the field position, crashing over for the first Wynnum try of the season on the subsequent set.

The highly discussed attention to the play-the-ball procedure by referees was evident early in the game, with penalties abundant by both sides and on both sides of the ball.

The Pride in fact, would successfully turn two of these consecutive penalties into points on their first possession when halfback Jake Clifford straightened up off his left foot to score on his senior Northern Pride debut.

Despite a few chances, scoring haltered in the wet, and Wynnum in particular failed to land the final pass on a couple of occasions, including a “gimmie” to centre Jeriah Goodrich in the 23rd minute.

A Todd Carney penalty goal in the 27th minute would be the only separation between the two teams after the five-eighth missed a second and almost identical attempt right on the stroke of halftime.

Composure was the message at the break from Seagulls coach Adam Brideson.

“We had a lot of opportunities down inside the 20, we just couldn’t get across the line due to our own errors,” he said.

Brideson also expressed thought his team’s interior defence wasn’t quite up to par when dealing with the Pride’s impressive bookends Will Bugden and Darryn Schonig.

The Pride fixed their scoring woes in quick fashion in the second half, with Clifford earning a double on debut after the former Cowboys Under 20 player chased and grounded his own grubber in an impressive effort to extend their lead after only two minutes.

Seagulls fans didn’t have to wait long for a reply, with an auspicious bounce of a Templeman kick gifting Wynnum’s try-scoring machine Daniel Ogden a try in the corner four minutes later, tying the game up after a Shaun Nona conversion out wide.

This seemingly flicked the proverbial switch for the Seagulls, who went on to control the game after close range tries to Michael Dobson (46th minute) and Max Elliot (77th).

“We coughed up a lot of ball and couldn’t quite do a lot of the things we wanted to do,” Brideson said.

“We had to fix up a few little things, but fortunately we rectified them enough in the second half to come away with the two points.”

Wynnum Manly now look toward Round 2 where they’ll be aiming to defend BMD Kougari Oval for the first time this season against last year’s runners up, the Sunshine Coast Falcons.