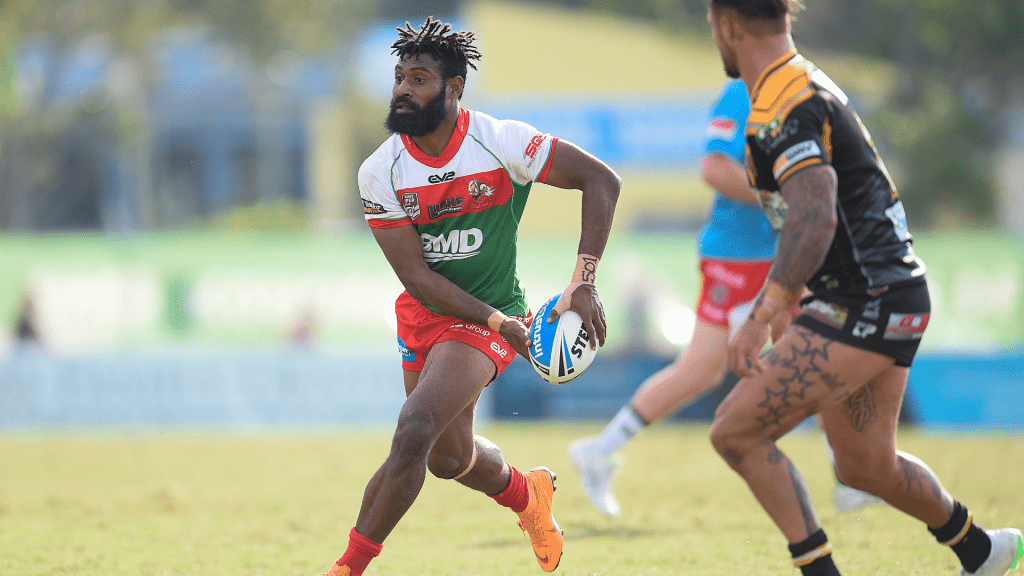 BMD Wynnum Manly Seagulls fullback Edene Gebbie is one step closer to realising his childhood dream by signing with the South Sydney Rabbitohs for the 2020 and 2021 seasons today.

Gebbie, 24, arrived at BMD Kougari Oval this season and has captured the imagination of the Chook Pen faithful with his game-changing runs and stunning pace.

The flyer made his international Test debut for Papua New Guinea against Samoa in the Oceania Test series this year, having already represented Papua New Guinea in a number of Prime Minister’s XIII and non-Test fixtures prior to this year.

Gebbie has been a statistical monster for the Gulls in 2019, leading the competition with 2,938 run metres (averaging a massive 209.9 run metres per game) and throwing in 6.8 tackle breaks per game and 9 tries.

Gebbie is rated as one of the most exciting players currently in the QRL competition and will go down as one of the best signings in Wynnum Manly history. He was chased by a number of NRL clubs for his services, and the Rabbitohs will give him his chance to progress to the NRL level over the next two seasons.

“Edene is an exciting prospect and we’re looking forward to seeing him develop his skills over the next two years under the guidance of our coaching staff,” Rabbitohs General Manager of Football, Shane Richardson, said.

“He has scored 19 tries in 29 games over the past two seasons with his sides winning 22 of those 29 games in which he has played. His speed and hard running are his major assets and we’re sure that he can add more strings to his bow in our system.

“He brings with him international experience and with some refinement of his game, as well surrounding him in a full-time professional environment, we’re certain he has what it takes to move towards an NRL debut.

“His signing is another example of our recruitment plan to introduce players to our squad with great pedigrees and great character. We’re all keen to see what Edene can achieve at our Club.”

Seagulls CEO Hanan Laban is very proud of the departing Gebbie and hopes he finishes his career on the Bayside in the best way possible.

“Edene is an incredible talent who has been fantastic for the Seagulls this season. He was quite raw when he first arrived here, and it is a credit to Edene’s hard work and also (Head Coach) Adam Brideson and his staff who worked with him closely, to develop his game to an NRL level,” Laban said.

“He is a valued member of our club who the boys love having in the team each week. He has bought into the culture and expectations of the Seagulls and I am very happy that he is one step closer to realising his dream.

“It would be fantastic to see Edene continue his strong form and leave a lasting impression on the passionate Chook Pen with a deep run into September.”