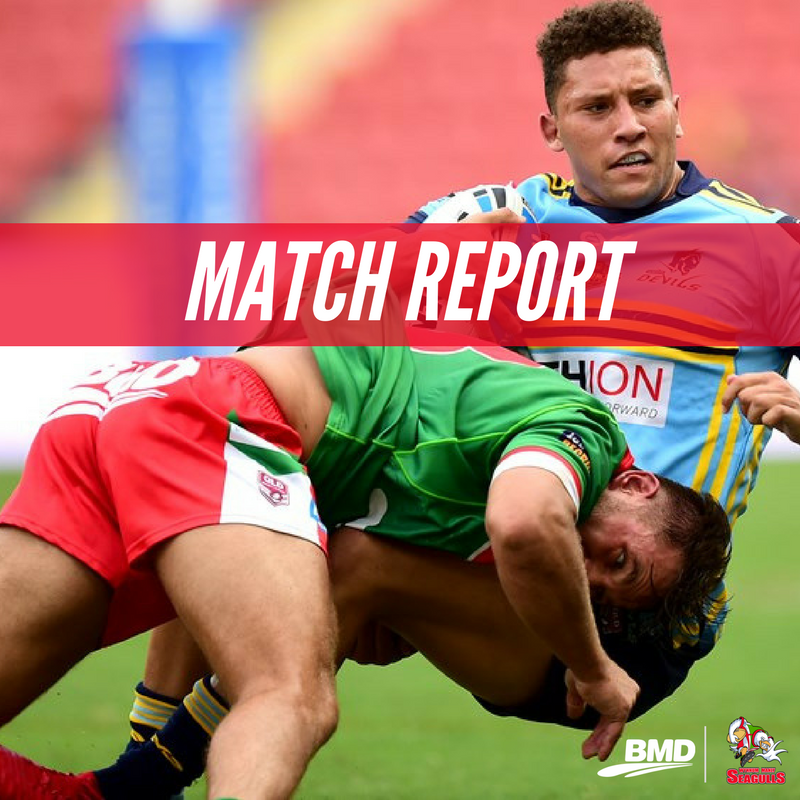 The big stage of Suncorp Stadium held no fear for Til Vea, with the big Wynnum Manly Seagulls forward scoring two blockbusting tries to help his side to a 31-18 win.

He was ably supported by try-scoring wizard Daniel Ogden who picked up his own double in the entertaining game which was the first time a Cup game had been played as a curtain-raiser to an NRL game at Suncorp Stadium since 2007.

That day Norths (featuring a fresh-faced Will Chambers) faced off against Aspley.

Today, it was a strong run from Vea who was unstoppable close to the line that opened the scoring for the match, with the big forward changing in from 10m out inside the opening 10 minutes

Pat Templeman had no trouble with the conversion – but missed his next attempt just over 10 minutes later, with Ogden having gone over out wide on the left wing. It was a slick backline play with Michael Dobson and Templeman involved in getting the result.

Technically a Norths ‘home’ game – they were finally on the board thanks to Alex Bishop eight minutes before halftime.

However, they undid their good work at the kick-off when winger Paul Ulberg tried to take the ball out from the sideline, but messed up his timing when planting his foot over the line.

This handed the ball back to Wynnum who had time to again swing the ball out wide to Ogden for his second try, again out wide.

It was a healthy 18-6 lead at halftime to the Seagulls – but it seemed like their second half wobbles would worry them again, as Norths were able to score three minutes after the break after Templeman was unable to hold onto a kick just out from his own 10.

The Devils presses out wide and Chevi Ellis was over on the left-hand side, scoring the 150,000th point of the competition.

However, another even more powerful run from Vea in the 56th minute halted any thought of a comeback, with the forward running a similar line to bust through the defence.

By then, the game had slipped away from the Devils, but they still pressed to score points, with Carne Doyle-Manga pushing his way over with nine minutes to go.

However, the final scoring plays belonged fittingly to Wynnum Manly – who for the most part of the match seemed to clicking together nicely – with former Devils Delouise Hoeter ducking his way in underneath the defenders at the try line to score.

Templeman put an exclamation point on a dominant display by his team with a 79th minute field goal.

Next weekend, the Seagulls will travel to Davies Park to face a Magpies side hoping to bounce back from their first loss of the season, while the Devils are back at Bishop Park hosting the PNG Hunters.