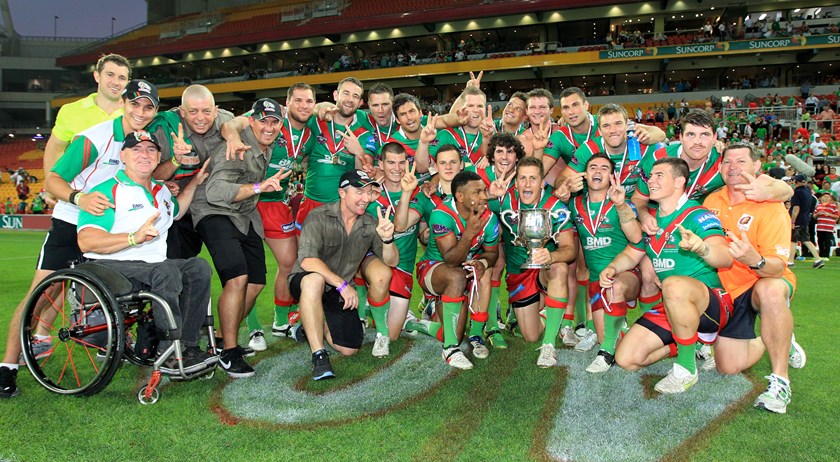 The BMD Wynnum Manly Seagulls are proud to be celebrating the anniversary of two memorable premierships in 2022.

Both the 1982 and 2012 premierships hold a special place in the hearts of our supporters and club staff, and provide two of the greatest moments in Seagulls history.

The 1982 premiership kickstarted the golden era of rugby league for Wynnum Manly; a period that remains the most successful in the club’s history.

With Des Morris as coach, and notable players: Gene Miles, Colin Scott, Rod Morris and Greg Dowling, the Seagulls finished the 1982 regular season in 3rd position. They defeated Redcliffe 35-0 in the knockout semi-final and then Valleys 26-5 in the preliminary final. Wynnum Manly had finally made it back to the first-grade grand final after 32 years, where they beat Souths 17-3 to win their first ever premiership.

Souths coach, Bob McCarthy summed up the game perfectly when he said “our defence was great, theirs was magnificent”. In scenes previously unheard of in Brisbane sport, the district went into a week of celebration with the whole of the bayside swathed in red and green. Wynnum Manly’s stunning run in the 1982 final series had seen them score 78 points in 3 games and concede just 8.

The club was further rewarded when Gene Miles and Rod Morris were selected in the 1982 Kangaroo Touring Team, thought of by many as the greatest to leave Australian shores.

The 2012 premiership team, coached by Paul Green, including players such as Jake Granville, Luke Dalziel-Don and Dane Carlaw, backed up from the 2011 premiership and finished the season in second position. Despite losing the qualifying final, the Seagulls won through to the grand final for the second year in a row.

After a close first half, Wynnum Manly sealed the victory in the 78th minute with a try under the posts. The Seagulls became just the second club, after Redcliffe in 2002–2003, to win back-to-back premierships. The 2012 Grand Final would be the last game at the club for Seagulls head coach Paul Green, who went on to the NRL, reuniting with Jake Granville to win the 2015 NRL premiership with the North QLD Cowboys.

With such a high calibre of players in both teams, and plenty of memorable stories to tell, the Seagulls dual Premiership Reunion event promises to be an afternoon you won’t want to miss.

The event details are below: