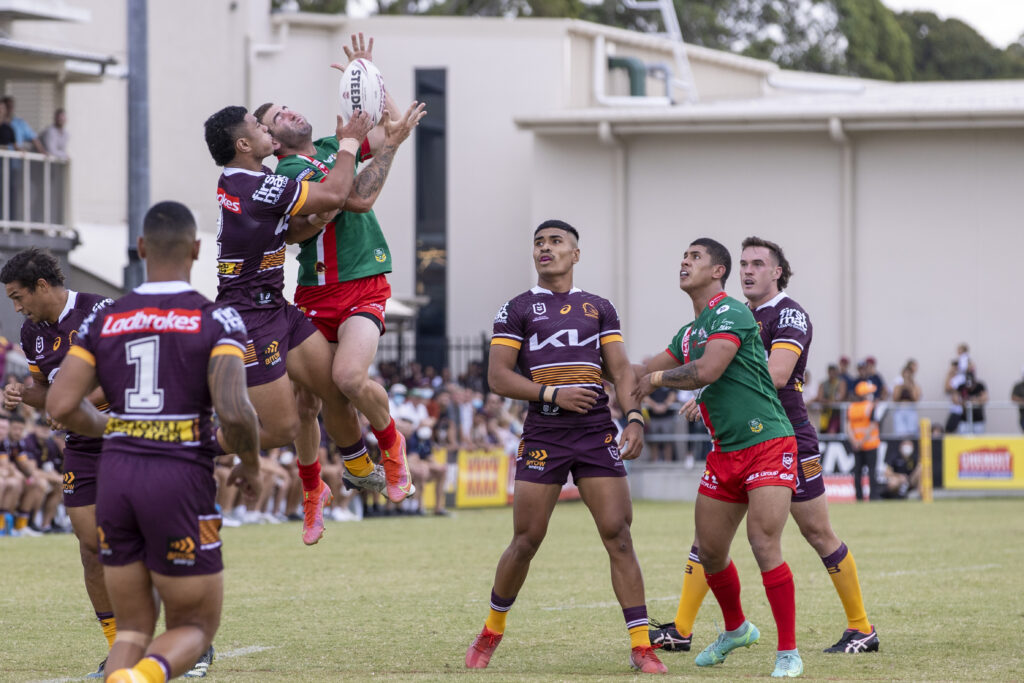 The BMD Wynnum Manly Seagulls are excited to announce a number of new signings for their 2022 Hostplus Cup squad.

After having 12 players sign NRL contracts following the highly successful 2021 season, the Seagulls staff worked hard in the off-season to rebuild the squad that will challenge for the premiership in 2022.

The number of players moving into the NRL from 2021 is an achievement not lost on the Seagulls coaching staff, filling them with a great sense of pride.

The recent success of the Seagulls football program is a very attractive proposition for incoming players as they look to follow the path of the players before them.

Barnstorming backrower, and two-time NSW Cup player of the year, Zac Hosking joins the club from the Newcastle Knights. He featured heavily in the Broncos trial and will be an integral part of the Seagulls right edge combination this season.

Another addition to the Seagulls squad, Falakiko Manu (pictured above, jumping for the ball) previously debuted for the Canterbury Bulldogs in the NRL last season. He moved to Brisbane on a train and trial deal at the Broncos, playing against Wynnum Manly in the trial match on February 12 and BMD Kougari Oval, and then joining the Seagulls squad afterwards.

Bailey Hartwig moved to Wynnum post-Christmas, arriving from Group 11 in the NSWRL competition. The former Canberra Raiders’ SG Ball and Holden Cup player has made an impact straight away, training well in pre-season and starting against the Broncos in the February 12 trial.

The Seagulls are excited to see how all of the new additions to the squad, will fare in this weekend’s trail match against Brisbane Tigers. Unfortunately, the wet weather forced the cancellation of their match against Sunshine Coast Falcons last weekend, meaning there is only one more game situation to impress Head Coach Adam Brideson before the Seagulls’ Round 1 game on March 20 vs Burleigh Bears.

The full list of new signings for the 2022 season are below: