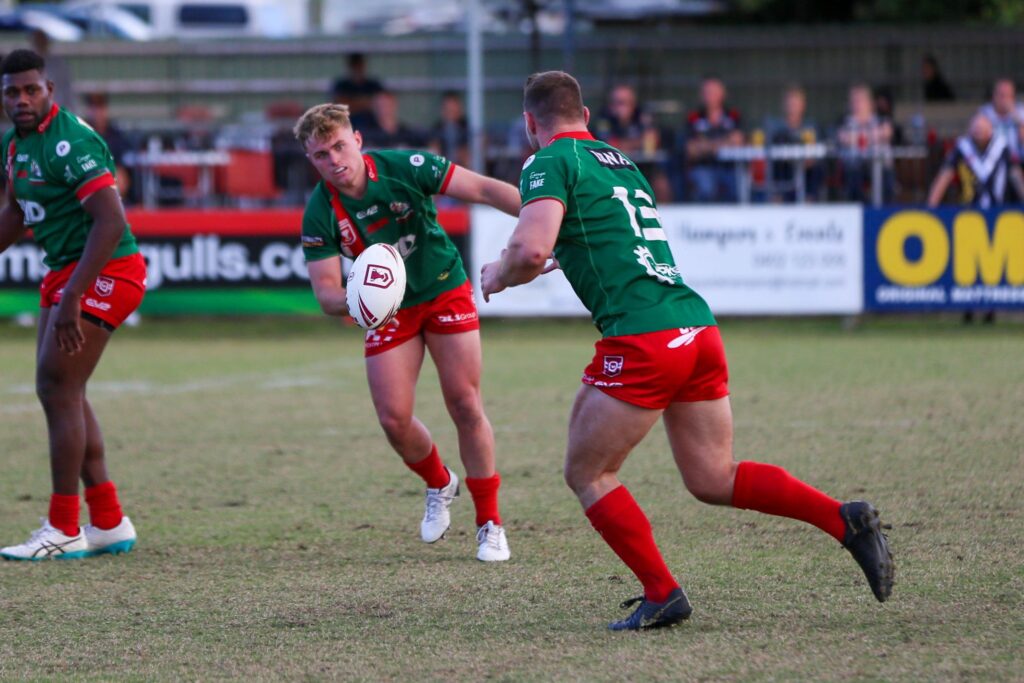 Not even two tries from hard working Luke Bateman could get the win for Wynnum Manly Seagulls over Souths Logan Magpies in their ANZAC Round match at BMD Kougari Oval.

The Magpies were flat for the first 30 minutes of the game, primarily from the shock at Bateman charging over for a try next to the posts in only the second minute of the game. Ben Farr converted and before the fans in the leagues club had emerged with their first drinks, the Seagulls were up 6-0.

There was hard charging from Bateman, Epel Kapinias and Kalolo Saitaua during the first 30 minutes which gave the Seagulls excellent field position, culminating in a great second try to Bateman in the 31st minute. Farr converted and it looked like Wynnum would go the dressing rooms at half-time 12-0 up.

However, Souths Logan had different plans and with a minute and a half left on the clock, debutant Tristan Sailor, with dad Wendell Sailor – a former Brisbane Broncos star who made the trip up from Sydney with his wife – crashed over for a sensational try out wide.  Harradyn Wilson missed the conversion, and the score sat at 12-4 at half-time.

It was a different story early in the second half with the Seagulls taken aback with the Magpies’ physicality, except for maybe Saitaua, who had another standout performance coming off the bench.

The Magpies ran over the top of the Seagulls in the 48th minute via a Richard Pandia try that Wilson converted and the scores were close at 12-10 Wynnum.

The Seagulls got over the line another two times with no reward, with supporters in The Chook Pen demonstrably voicing their disappointment when Zac Hosking forced his way over the line only to be denied a controversial forward pass.

In the 58th minute, with the gas in Wynnum Manly’s tanks draining fast, Magpies centre Brenko Lee dashed over the try line and with a Wilson conversion; the Magpies were up 16-12.

But as is usually the case in these Mitch Cronin memorial games, Wynnum Manly never gave up, and after having another great game, hooker Harrison Graham ploughed over late in the second half in front of The Chook Pen, with a quick conversion from Farr to bring the scores closer at 22-18 with a couple of minutes to go.

Wynnum gave away a penalty right in front with four minutes left and the score was 24-18 to Souths Logan.

Great games from Sailor, Quai-Ward and Wilson helped deliver the win for Souths Logan. Wynnum Manly’s players of note were Bateman, Graham, Farr and Saitaua, with strong performances from also from Hosking and TC Robati.

The Mitch Cronin Memorial Cup will be awarded at Wynnum Manly and Souths Logan’s next clash based on aggregate scores from both games.

Wynnum Manly will play Tweed Seagulls in Round 6.