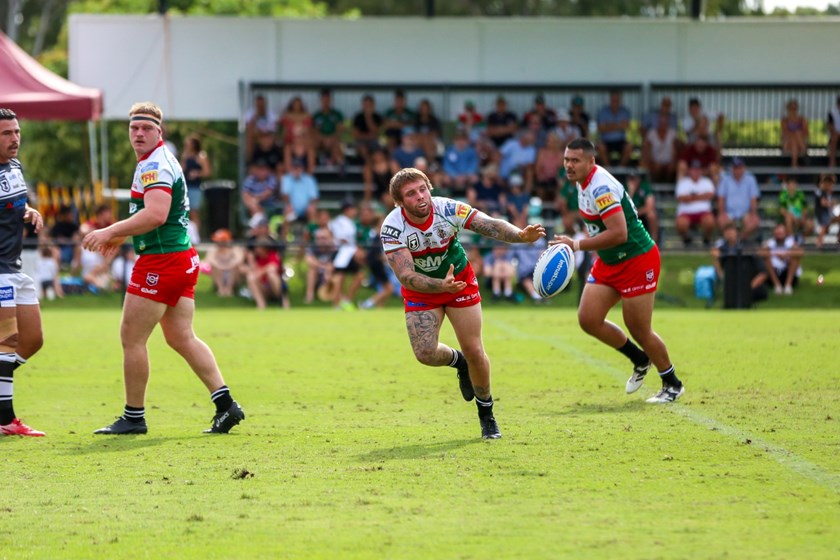 The Wynnum Manly Seagulls withstood a second-half surge from the Tweed Seagulls to hang on for a 36-24 win on Sunday. Check out all of the highlights in our Job Connect Replay.

Seagulls fans from both sides of the border flocked to Iona to watch Wynnum Manly take on Tweed, the first time an Intrust Super Cup game had been played at the ground, and on a school campus in general.

The hosts made the crowd fell welcome with a temporary “Chook Pen” on the hill overlooking Fr. Davine Oval.

Prior to the start of play, the Gulls were accompanied by local Iona juniors through a guard of honour formed by current and former Iona College students.

Prior to the game, both teams honored the Oliver family and held a minute silence for Mark (Ollie) Oliver, who passed away recently.  Mark was a lifetime supporter of the Gulls and an Iona old boy.

When play got under way Wynnum went at it from the jump and were 26 points up after 20 minutes. Veteran Ed Burns (4′) went over early followed by a double from Kauri Aupouri-Puketapu (9′ and 17′). Selwyn Cobbo (12′) and Mathew Lyons (20′) both scored on debut to build the Seagulls lead.

Jack Campagnolo slotted a penalty in the 27th minute to add his tally of 3 conversions, and the Queensland Gulls were looking at going to the sheds halftime with a clean sheet.

Late in the fist half Tweed finally scored close to the posts through a Jaleel Seve-Derbas try and with Lindon McGrady’s conversion, the halftime score was 28-6.

Inside 11 mins of the second half, Wynnum had two more tries on the board, with a very handy long-range effort by Jayden Berrell followed up by Matt Lyons soon after.

After building a comfortable lead lead, Wynnum then lost their momentum and their direction late in the second half and let Tweed back into the game.

Three tries in seven minutes by Tweed from the 60-minute mark from Talor Walters and a double to Liam Hampson brought the visitors to within striking distance at 36-24. The Seagulls were able to regain their composure during the final 10 minutes and secured a number of loose and contested balls to hold on and win.

After the game, coach Adam Brideson was genuinely pleased with the result, considering the late changes both teams had to make to their line up. Prior to the game, the NRL’s Project Apollo made the decision to withdraw all NRL team’s top 30 squad member players due to the recent COVID conditions in Brisbane.

With the win, Wynnum start the season 2-0 and a dressing room full of optimism and during Round 3 will face the Northern Pride in Cairns on April 10.