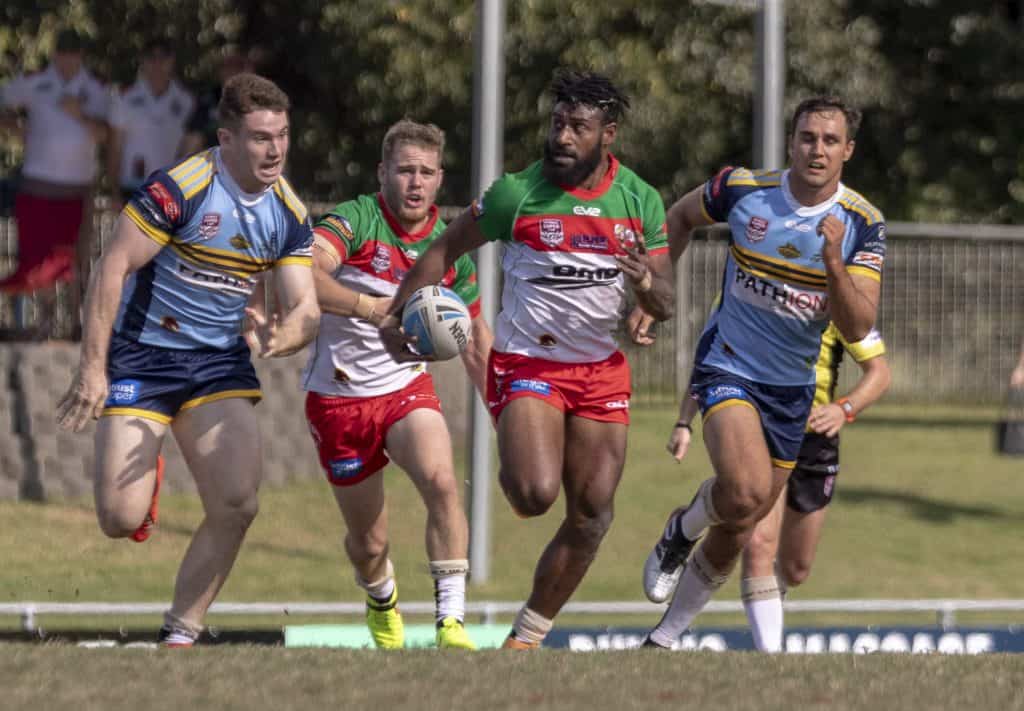 The Wynnum Manly Seagulls led from start to finish to beat the Hunters 60-4 at BMD Kougari Oval in a win which was sealed by a triple to Ed Burns and doubles to Jordan Drew, Mitch Cronin and Edene Gebbie.

The Seagulls attack was at its fluent best all match. Backline movements were first class as the forwards powered them down the right end of the field.

It all started with a error off the kick off from the Hunters and the Seagulls pounced. A few tackles later, Drew scored his first try of the afternoon set up from some slick play out of dummy-half from captain Cronin.

Drew scored his second in the eighth minute after some quick hands across the backline enabled him to cross in the corner.

Pat Templeman knocked over his first goal of the afternoon from the sideline to take the Seagulls out to 10-0 lead early.

The Hunters weren’t helping themselves, giving away penalty after penalty; gifting the Seagulls great field position.

After some sustained pressure, the Seagulls crossed – this time through Cronin who again opted to dart to the blindside and score.

The points didn’t stop there, as last week’s debutant Dredin Sorensen Mcgee scored off the back of a Sam Scarlett chip which was batted back in from winger Jack Goodsell.

The Seagulls kept rolling and Gebbie against his old side assisted winger Goodsell to score his first of the afternoon for the Seagulls to lead 30-0.

Hunters winger Junior Rau benefited from a cross out wide; but the conversion was missed, and the Seagulls went into the break with an unassailable 30-4 lead.

The visitors needed to start the better in the second and unfortunately for Hunters fans, it was the complete opposite.  Off the first set, the Seagulls worked the ball 100 metres and forced a drop out.

Not long after, Lachlan Lee scored his first try of the year, barging over close to the line, which took the score out to 40-4.

Burns had his second and third in the 62nd and 68th minutes – both scored in the exact same spot – and both assisted by fill-in centre Alex Barr who replaced Drew during the second half.

An inside ball from Scarlett had Gebbie over under the sticks, after threating all game against his former club.

He wasn’t finished there, as two minutes later, he had his double – again from an inside ball, but this time from Templeman and Gebbie ran 50 metres to score.

That would be the way it ended, a comprehensive performance from the Seagulls dominating from start to finish.

The Seagulls head into a blockbuster next week against the Blackhawks.

The Hunters will look to regroup, as they face the in-form Dolphins next week in Round 22.