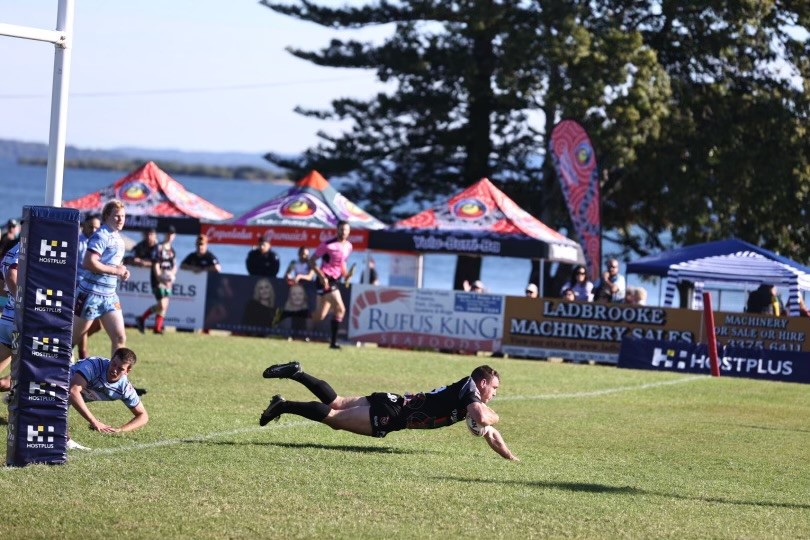 Returning to the island for the first time since 2019, the local community loved having both the Hastings Deering Colts and the Hostplus Cup games at Ron Stark Oval, Dunwich.

A large crowd turned out in the morning for multiple junior games and stayed for the day to cheer the Seagulls on, with diehard Seagulls fans catching the ferry over for the Colts and Hostplus Cup matches.

Early ill-discipline and mistakes cost the Seagulls, and the Capras took full advantage, putting three tries on the board in the first 20 minutes.

Tries to Radean Robinson (8th and 21st minutes) and Brandon Roberts (17th minute) had the Capras out to a 12-point lead, with the only thing keeping the Gulls in the contest being the wayward kicking of Trey Browne (1/5 conversions).

The Gulls made some substitutes, bringing on Kalolo Saitaua and Matiu Love-Henry, and this seemed to have an immediate impact.

The Gulls lifted their intensity and powerhouse forward Luke Bateman crashed over in front of a crowed clubhouse in the 28th minute, with Max Plath converting, and the Gulls were back in the contest at 12-6.

The Capras gave up a ruck infringement in the 36th minute and Triston Hope took full advantage, forcing his way over from dummy half.

The teams were off to the half-time break with the Capras leading 12-10.

The second half began with hard hits and tight defense, but this time it was the Capras’ ill-discipline that cost them, with a high tackle penalty leading to Tristan Hope scoring again in the 54th minute.

The Gulls hits the front at 16-12 and looked like they were finally getting into their groove.

Another dangerous tackle penalty by the Capras led to inspirational skipper Sam Scarlett sprinting over under the posts. With Plath’s conversion, Wynnum appeared to running away with the game at 22-12.

However, two penalties in a minute against Wynnum killed that momentum, with Brandon Roberts scoring his second try in the 71st minute.

Three minutes later, the Capras were in again with a try to Nixon Putt. Blake Moore slotted his first conversion for the day and tied the game at 22-all.

Sam Scarlett attempted a field goal but it was charged down with just two minutes remaining.

The Seagulls remained on the attack and looked certain to score, however Capras intercepted the ball and ran almost the length of the field before being tackled and spilling the ball.

Wynnum turned the ball over immediately and a penalty ensued for the Capras.

The siren sounded as the Capras lined up the kick. Confusion followed as one touch judge said the kick missed and the other said it went through the posts. However the referee overruled from his position and awarded the penalty goal, leading to a 24-22 Capras win.

The Seagulls next face the Brisbane Tigers at BMD Kougari Oval this Sunday 12 June at 2:10pm