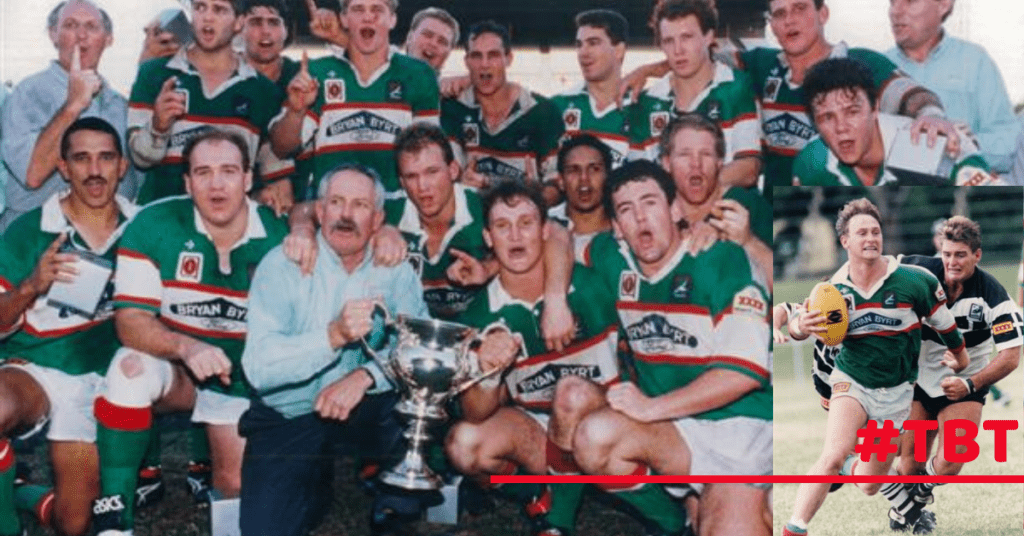 by Seagulls Forever | This week’s Throwback Thursday takes us back to 1995 with Captain, Ricky Taylor.

Story Source: The Courier Mail, September, 1995 – Wynnum Manly premier league captain Ricky Taylor needs only a premiership win over Easts on Sunday to cap a memorable year, after the tough centre emerged yesterday as winner of The Courier Mail/BRL best and fairest award.  The award, the longest running award of its kind in Australia, has made Taylor $1000 richer.

Votes were tallied from each game on a 3-2-1 basis by The Courier-Mail’s rugby league team and Taylor’s consistent form has seen him among the leaders for most of the season.The award polishes off his second placing in the Rothmans Medal, his numerous representative matches and his selection for the Queensland Residents tour to PNG next week. Taylor’s season blossomed when Seagulls coach Peter Donkin handed his short tempered centre the captaincy following a mid-season serious knee injury to experienced prop Pat O’Doherty.

“He has worked hard on developing his captaincy and has put in a lot of work to get the results,” Donkin said. “He is a reluctant centre – he wants to be closer to the action.  But how a Sydney club has not picked him up yet has me astounded.”  Early in the season Taylor was prone to the occasional rush of blood, an example being in Wynnum’s round-nine clash with Brothers when he was involved in an incident with a Brothers try scorer well after he had planted the ball.

The referee penalised Taylor and gave Brothers another shot at goal after the conversion.  The eight-point try in the shadows of halftime brought Brothers back into the match after they had trailed 14-2 and the game finished up 28 all.

Donkin took a major punt in having Taylor lead the side towards the semi-finals in O’Doherty’s absence. His faith was rewarded as Taylor established himself as the dominant centre in the competition.His performance in last weekend’s preliminary final win over Brothers highlighted his maturity as a footballer.

After suffering a heavy defeat from Easts in the major semi-final,  Wynnum bounced back, inspired by skipper Ricky Taylor to defeat Brothers in the preliminary final and qualify for their first Grand Final appearance in a decade.  The Preliminary Final was played as a curtain raiser to an ARL Semi Final and gave the players of both clubs a rare opportunity to perform in front of a capacity crowd.

The Grand Final was an absorbing game, which seesawed throughout. In the end, Wynnum deservedly won 32-24 to claim their fourth A Grade title.  To cap off a memorable day for the club, the Under 21 side was also victorious, defeating Souths 12-10.

For more stories head to our history website seagullsforever.com.au