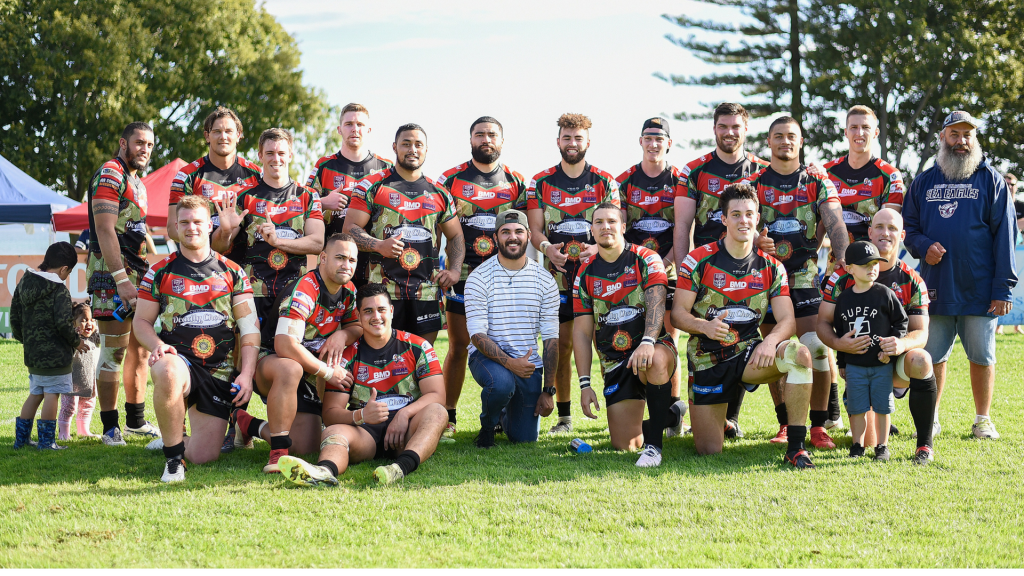 The Wynnum Manly Seagulls held on against a final onslaught from the Tweed Heads Seagulls to post a 24-22 win in their Round 17 ‘flockbuster’ match.

Played at the picturesque Ron Stark Oval, North Stradbroke Island as part of the Intrust Super Cup’s Indigenous Appreciation Round (to coincide with NAIDOC Week); the event served to highlight Indigenous and Torres Strait Island culture; in particular, that of the Quandamooka people.

Coming into the game, the NSW-based Seagulls were looking to stay in touch with the top six; while the Baysiders were playing for pride – and they got off to the perfect start when Daniel Ogden pounced on a grubber kick that was not cleaned up by Tweed Heads in just the second minute after they had initially let a high kick from Michael Dobson bounce.

However, Tweed Heads responded soon after thanks to big winger Tevita Folua who was on the end of a nice play by Lindon McGrady – holding up his pass until the right moment to swing the ball out wide to his right.

McGrady was in the action again and scored one himself only 10 minutes later; going in next to the posts after making a break after he fed the opposition a dummy. His second conversion attempt was successful and his side held a 10-6 lead which they carried into the break.

After halftime, it seemed that Wynnum Manly were again going to score in the opening moments of the half when they thought they were over in the left-hand corner, but the video referee confirmed no try.

However, they didn’t have to wait long to add to their points tally – scoring four tries in 15 minutes to put Tweed Heads firmly on the back foot and to set up the win.

Centre Ed Burns got himself a double four minutes of play; touching down in the 50th after a strong run to the line and 54th minute after chasing for another high kick from Dobson.

Forward Alex Barr then crashed over – this time to the right of the field – after an error at the back with a slippery ball from Tweed Heads handed over possession.

Wynnum Manly were suffocating Tweed Heads into making errors and again gained passion – making the most of it when a nice backline play went down the left-hand side for Ogden to go over for his second in the 65th minute.

When it seemed like the ‘local’ Seagulls were going to run away with it, Tweed Heads fought back, and kick by Kane Elgey ricocheted off the legs of defenders back into the foot of Lamar Liolevave who toed the ball ahead and chased it through to score with 10 minutes to go.

A 40-20 kick from McGrady helped them get back on the board again soon after; with Kiah Cooper over on the left after a long pass from Elgey found his man.

McGrady’s conversion was successful and Tweed Heads only trailed 24-22 with five minutes remaining.

They appeared to have all the momentum as Wynnum Manly then launched the kick-off out on the full and Tweed Heads pressed hard; with McGrady earning his side a line drop-out with a smart grubber.

However, they were not able to convert the pressure into the match-winning try; with Cooper coming oh-so-close for his side with three minutes to go; but he could not hand onto the ball when he had the tryline in his sights.

While a disappointing result for Tweed; it was a positive bounce back for Wynnum Manly who suffered a heavy defeat in their last round.

It was also a positive event overall, with a healthy crowd on hand to be part of the experience, despite the weather not playing along for parts of the day.

Next week; Wynnum Manly will face the Falcons at the Sunshine Coast, while Tweed Heads have an important game at home against Souths Logan.