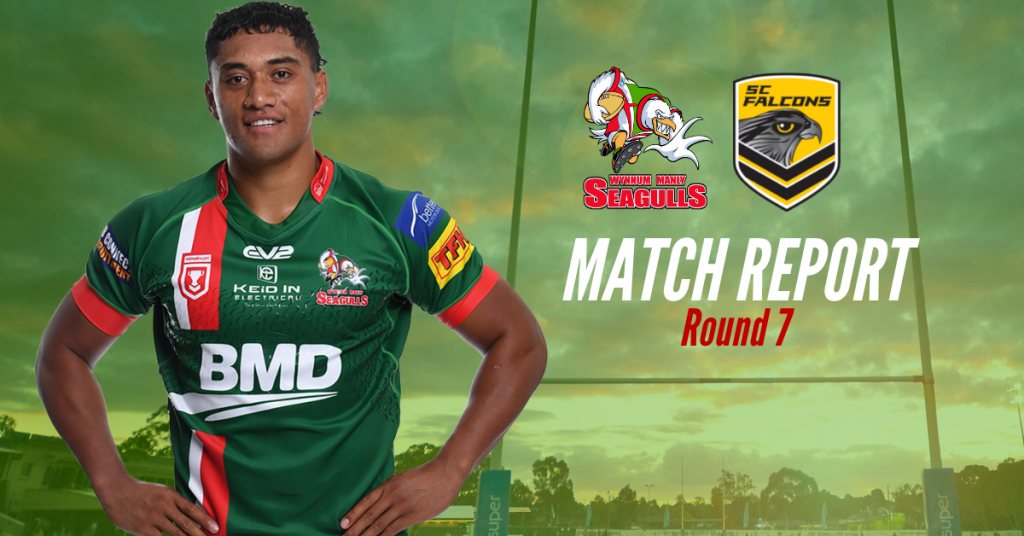 The Wynnum Manly Seagulls have solidified their position atop of the Intrust Super Cup competition ladder with a stunning come-from-behind 38-24 victory over the Sunshine Coast Falcons at Sunshine Coast Stadium.

With both teams coming off last-start victories, there was plenty like about the opening quarter of the match.

The Falcons shot out of the gates and through the pinpoint kicking game of Falcons co-captain Todd Murphy, the home side were able build some early pressure to take an early 18-0 lead within the first 25 minutes.

Sunshine Coast hard man Daniel Dole was forced from the field mid-way through the first half with a suspected broken thumb, which put an immediate strain on the Falcons bench.

This was all the invitation the Wynnum Manly side needed and before the first half drew to a conclusion, the visitors posted their first points of the afternoon with back-to-back tries, heading into the sheds eight points behind.

The second half was one way traffic as the ladder-leading Seagulls started to flex their attacking muscle.

Their hooking combination of Jayden Berrell and Issac Luke proved too hot for the Falcons to handle.

The former NRL rake showed plenty of class and experience, chiming in with some lovely, long-range kicking from dummy-half, while Berrell bagged himself a second half double off the back of some brilliant offloads from his mobile forward pack.

Ultimately, it was these offloads that set the pace of the closing 40, with the Falcons struggling desperately to withstand a constant barrage of second-phase footy.

In the few second half moments where the Falcons had an opportunity to get themselves back into the contest, execution let them down with both Cooper Johns and Murphy throwing intercept passes when going for the miracle cut-out ball to their respective wingers.

The Coast did finally slow the Seagulls’ momentum, turning the tables and posting a last-minute consolation try.

Improving in the second half and “going on with the job” has been a real focus for coach Sam Mawhinney and the Falcons, but today was a case of them falling back into old habits and falling out of the game entirely in the second period of play.

Trent Loiero was strong in a beaten side, and has become one of the club’s most consistent performers after his NRL debut earlier in the year – awarded the Falcons’ player of the match award but was understandably sombre.

“It was pretty disappointing out there today,” the back-rower said.

“Our discipline in the second half made it really hard for us.”

The win sees the Seagulls remain undefeated and on top of the table, while the Falcons have just held on to fourth position, thanks to a fairly healthy for-and-against.

The challenges don’t stop for the Falcons, who travel down the Bruce Highway to rumble with the Norths Devils – who leap-frogged Tweed into outright second, setting up what’s sure to be another mouth-watering top four encounter.

The Seagulls tackle Ipswich on May 30th – watch it live on Kayo, 9Now or QPlus.