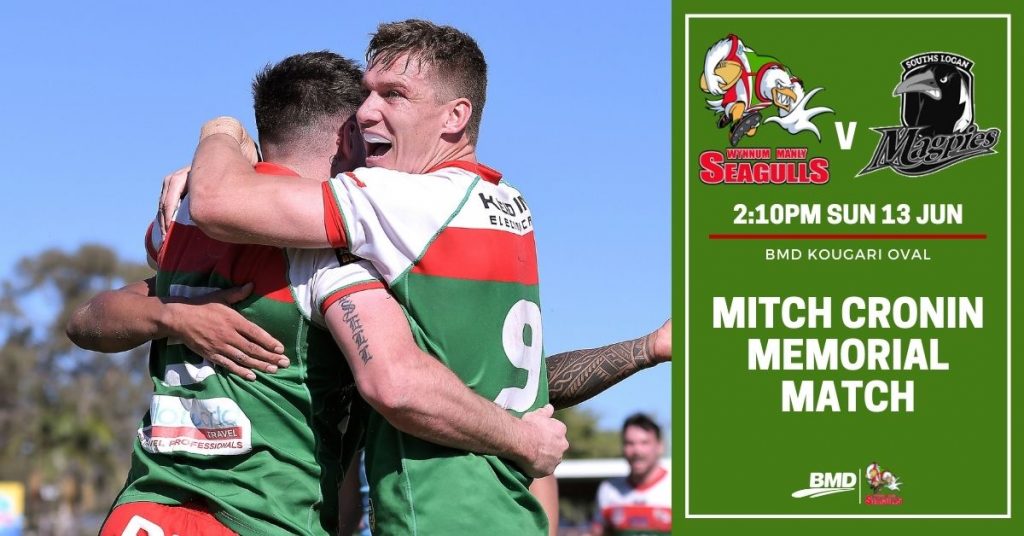 Wynnum Manly Seagulls will host the Mitch Cronin Memorial match in honour of our late captain when the Seagulls face the Souths Logan Magpies on Sunday June 13 at BMD Kougari Oval.

The Seagulls and Magpies will play for the Mitch Cronin Memorial Cup and will become an annual fixture for both clubs.

The match-up reflects Cronin’s history with both clubs, where he debuted with the Magpies in the Intrust Super Cup in 2011 before joining the Seagulls in 2016 and becoming club captain.

In honour of Cronin, the respective hookers of each side will wear a different playing number on the day and the number nine jersey from each team will be placed on the first chair of the club’s bench.

There will be a special tribute to the much loved former captain prior to the Intrust Super Cup game, with both teams walking out together alongside former team mates of Cronin and a dedicatory video will be played on the big screen.

Prior to kick off there will be a minute’s silence in recognition of Cronin.

Seagulls CEO Hanan Laban said the match will be a celebration in memory of the beloved club man.

“Mitch Cronin was more than a great player, he was a beloved member of our club who made a huge contribution to the Seagulls and its community.

“Sunday June 13 will be a special day to honour Mitch, and we expect there will be a lot of people wanting to come and pay tribute to him alongside his family, friends, teammates and former teammates.”

The match will be broadcast live on Kayo, 9Now and Q+ (via the Queensland Rugby League website and Intrust Suoper Cup Facebook Page) from 2pm on Sunday 13 June.

Tickets are available via Brisbane Tickets.