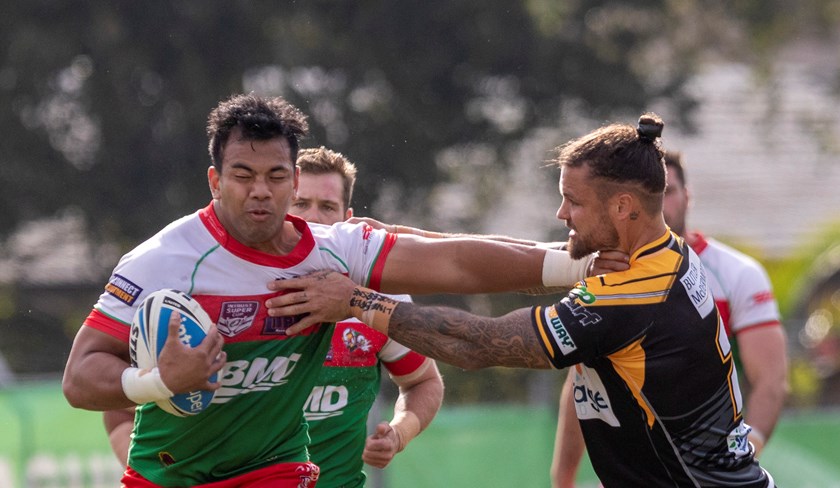 It was a record-breaking victory for the ladder-leading Sunshine Coast Falcons this afternoon, defeating the Wynnum Manly Seagulls 30-20 to claim the most consecutive wins at the start of an Intrust Super Cup season.

Registering their 14th win of the season in a top of the table clash at BMD Kougari Oval, Sunshine Coast overcame a shaky start that included early uncharacteristic mistakes to fly past Wynnum just before halftime, and from there, they never looked back.

The unbeaten Falcons started the match with two errors and the Seagulls took full advantage in the opening few minutes.

Winger Richie Kennar, beaming full of confidence from his recent Brisbane Broncos debut, leapt above Sandor Earl before passing to Alex Barr to score the first try for the second week running, opening the scoring for the Seagulls.

It didn’t take long for the Falcons to hit back with their first venture into good ball territory coming up trumps – a slick backline movement allowed winger Siti Moceidreke to cross in the corner and lock up the scores 4-4 with nine minutes gone.

Both sides were playing expansive and attacking footy and even though Wynnum star-fullback Edene Gebbie was returning from injury, it didn’t take him long to leave a mark on the match.

Handed an inside ball from Sam Scarlett, the competition’s leading metre-eater split the defence and crashed over with Patrick Templeman making no mistake with the conversion to regain the lead at 10-4.

After Cooper Johns forced a repeat set, it was Sunshine Coast’s turn to try and peg one back.

Their in-form rake Harry Grant opted to run himself down a short blind-side, which caught the markers napping, taking full advantage to score and lock up the scores once again at the first quarter mark.

The unbeaten Falcons looked to be frustrated with the defensive pressure the Seagulls were applying – at one stage, winger Jon Reuben tried to pounce on a loose ball but only managed to concede an error.

Moments later, Gebbie looked to have his double, but the officials ruled it to be a double movement and the scores remained 10-10 with eight minutes remaining in the first half.

Just as the Seagulls were threatening, a grubber kick from Templeman that bobbled into the in-goal area was picked up by Falcons flyer Nat McGavin, who managed to get through a broken defensive line to find Reuben with 70 metres to run.

With no Seagulls in front of him, he unselfishly offloaded the ball to speed star Nicho Hynes to score under the posts and ensure the Falcons went into the break with a 16-10 lead.

At halftime, Seagulls coach Adam Brideson wanted his side to be patient when attacking the Falcons line, urging them to build pressure and as a result, the points will come.

The Seagulls needed to start fast in the second half, but it was the Falcons who struck first.

Lachlan Roe barged over close to the line and Murphy nailed the conversion to extend their healthy 22-10 lead.

The weight of possession started to swing the Falcons way and so did momentum, earning a penalty right in front of the posts, giving them two more points to add to the tally.

Relief for the Seagulls and the Chook Pen came when a game-clinching Falcons try was disallowed due to an offside player.

As was the case in Round 1 when these teams first met, Murphy and Scarlett were putting on a kicking masterclass.

First, Murphy poked one through for Chris Lewis to score what was thought to be a match winner, but just a minute later, Scarlett did the same for Barr to pick up his double and give Seagulls fans a glimmer of hope at 30-14 with 7 minutes to go.

The Seagulls had a lot of work in front of them and knew they had to score and fast, marching down their attacking end of the field.

A grandstand finish was on the cards when Barr came up with a fantastic try assist for Jayden Berrell to cross and make it 30-20 with two minutes to play, but time got the better of a resurgent Seagulls outfit, giving the Falcons the two points to continue their unbeaten run.

The 14th consecutive win etches the Falcons into history, recording the most consecutive wins at the start of the season, surpassing the previous 13-win record held by the Tweed Seagulls.

After a bruising encounter, the representative round bye is fitting for both teams to rest and recoup ahead of Round 15 with the Falcons to face the Dolphins in a fortnight.

For Wynnum, the Chook Pen will fill up for their clash at home against the Capras.