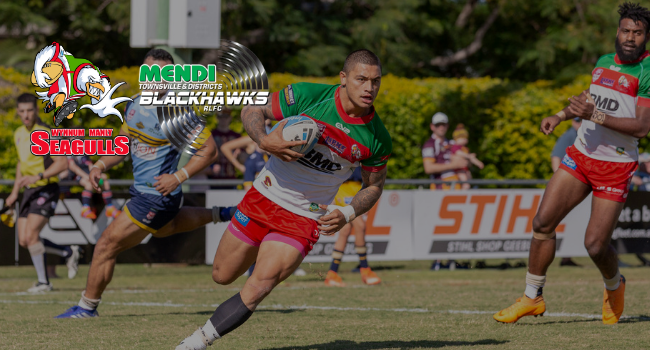 The Gulls are back home this Saturday against Townsville Blackhawks for captain Mitch Cronin’s 100th Intrust Super Cup game in a battle of 3 v 5!

Here are the QRL’s “Stats That Matter”

Wynnum Manly haven’t won 6 games in a row since their premiership winning year in 2012, but will have that chance this weekend when they host Townsville on Saturday afternoon.

Wynnum have been impressive this season, and have won their past 5 games and are proving especially hard to beat in front of their home crowd.

Despite Wynnum Manly’s impressive home record, Townsville have the winning-edge over the Seagulls in their past encounters at BMD Kougari, winning both games in the bayside – by 6 points and 4 points.

The game will be an extra special occasion for both sides, with Seagulls hooker Mitch Cronin playing his 100th Intrust Super Cup game (Souths Logan previously) and Blackhawks second rower Temone Power racking up his 50th game for Townsville in the Intrust Super Cup.

Townsville Blackhawk halfback Shaun Nona needs just four more points to reach 600 points in the Intrust Super Cup – will be interesting to see if he can bring it up against his former club.