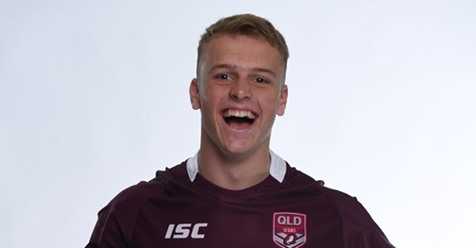 The greats of rugby league have all had mentors and Queensland Under 18 centre Reece Hoffman is no different.

Hoffman has credited Wynnum Manly Seagulls star back Delouise Hoeter for helping him on and off the field in rewarding ways, as he prepares for the game of his life at Suncorp Stadium on Wednesday night.

Master coach Wayne Bennett looked to legendary league figures such as Ron Massey and Bobby Bax for guidance, while Queensland Maroons centre Will Chambers said in Queensland camp this week how his mentor Greg Inglis had left him a legacy of self-belief ahead of his showdown with Latrell Mitchell.

Hoffman, a star for Wynnum Manly in the Auswide Bank Mal Meninga Cup competition this year, is a footy-head who said he needed to find balance in his life, which he now has as a teacher aide at his former school.

Hoeter, who has been on fire at centre and wing in the Intrust Super Cup, is a massive influence for Hoffman.

“At the moment I am sitting behind Delouise Hoeter at Wynnum and I am learning a lot from him,” Hoffman said.

“I train with Delouise and try and learn as much as I can off him.

“On the field he has been very good at getting me to play to my strengths and is always one to offer his assistance.

“Delouise has had a fantastic season and he has been very good with my footy, but just as importantly off the field.

“I am always thinking about footy and he has been good at getting my mind off footy and making sure I focus on other things in life and have that balance.”

Hoffman has walked the talk in that regard and is now working at Alexandra Hills State High.

“I graduated last year and got into uni to do teaching but I have deferred that because my old school Alex’ Hills offered me a job as a teacher aide,” Hoffman said.

“I do that four days a week. I start in the gym, and then I might go out on the footy field and help out the younger grades because there is a rugby league program there.

“Dela’ has just told me to enjoy the process.

“I got into teaching at uni and when the opportunity came up at my old school I thought it would be good to put that on my resume that I have already worked with kids before going to uni.”

Hoffman is not signed to any NRL club at the moment, but hopes the showdown with NSW will put his name on the map and open an opportunity.

“This is going to be the biggest game of my life so far and hopefully we can get over NSW. That would mean the world,” Hoffman said.

“This is my first time in a Queensland team, so I am stoked to be a part of it.

“I like to think that I am smart with everything I do. I like to push up with the ball and be good with my communication with my half and counting numbers in defence and attack, and letting my winger know.

“When I get the ball I have lines I like to run. I’m learning all the time. I am looking forward to playing with (halfback) Sam Walker. He is obviously an enormous talent and I’ll be pushing up with him and letting him give me some ball. He can throw a pass. He’s already proved that at training.”

Hoffman was one of Wynnum’s best in the state final of the Auswide Bank Mal Meninga Cup competition and has eye on continuing to make progress.

“A few of us (under 18s) have progressed up to two games in the under 20s competition for Wynnum and played Mustangs and Norths and beat them,” Hoffman said.

“I’ll see how I go throughout the year and hopefully I can go on to bigger and better things.

“The centres I have looked up to in the NRL are Greg Inglis and Josh Dugan. They have been there and lived it and that is where I want to be.”