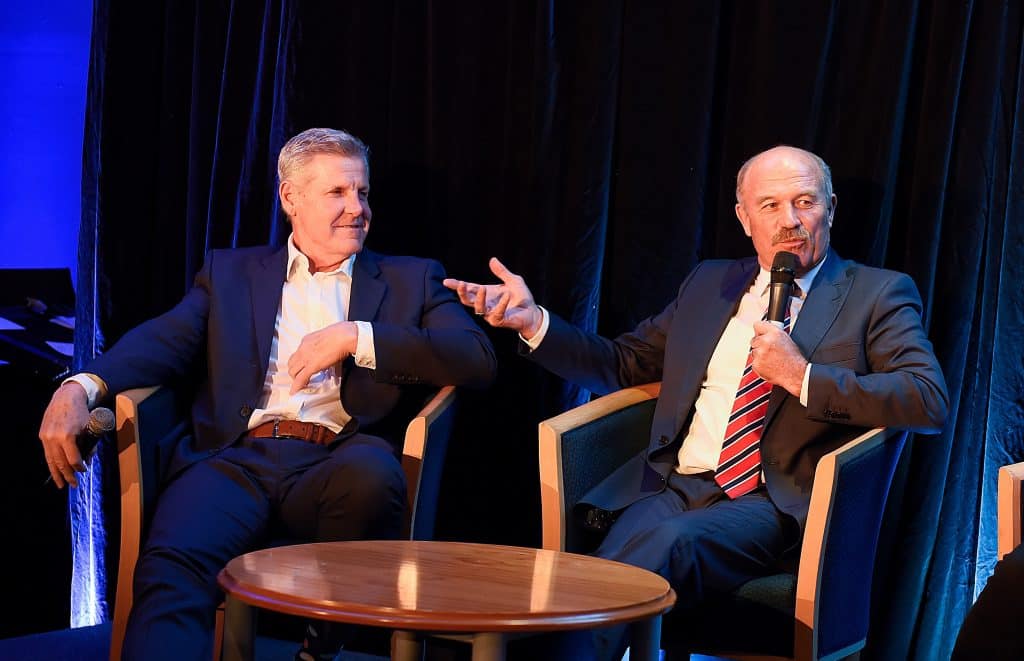 Wally Lewis and Gene Miles visited the players in August to speak about what it meant to them to play for the club and their words of wisdom lit a fire in Cronin and his men.

Lewis won two BRL titles with the Seagulls in 1984 and 1986. Miles was by his side in both of those wins and also tasted premiership success in 1982.

The Seagulls beat PNG Hunters 60-4 straight after the talk by the two Queensland greats and Cronin said their message was just as crucial ahead of the clash with Burleigh at Dolphin Stadium in the decider.

“Just before the finals we had Wally Lewis and Gene Miles come and talk to us about what it means to play for the club and it was massive for us. It was a great experience,” Cronin said.

“We had our captain’s run and a barbecue and then they spoke to us for about half an hour. That was just before we put 60 points on PNG.

“I think what they said really resonated with the players and made us realise we are in a position to create some history and not to waste the opportunity that we have.

“They spoke about trusting your mates and realising that these opportunities don’t come around too often and to make the most of it and not have any regrets.”

Cronin, formerly in the Canberra Raiders and Brisbane Broncos system, has led his side brilliantly this year after he was given a massive vote of confidence by his teammates before being installed as skipper.

“The players voted me in after we all sat in a room and voted on a three, two and one [points system]… so it was a really good feeling knowing that the players see you as that sort of person and knowing that they are all behind you. That gave me a lot of confidence that I could do it,” Cronin said.

“I am not the biggest talker but I guess it is more about what I do with my actions and I have grown into the role a little bit more. I now enjoy talking on the field and leading the boys around. There are still some things I’d like to work on but we are in the grand final so I guess I can’t be doing too much wrong.

“My job as leader has been made pretty easy because one thing we have worked on this year is our leadership group and it is a really good one. We’ve got Pat Templeman, Sam Scarlett, Delouise Hoeter, Aaron Rockley, Jayden Berrell and Matiu Love-Henry. We all lead and share the load.”

Coach Adam Brideson said Cronin had delivered on the faith shown in him by his peers.

“I just thought it was really important that the players got to choose the person they respected the most and Crow has done a fantastic job,” Brideson said.

“He has certainly upheld high standards. He is not a verbal leader, but whether it is during the week on the training field and at the gym, or game day, he does everything 100 per cent and the boys all respect that and follow him.

“He has been in the Canberra and Broncos system and has brought that professionalism back to our club so a lot of the younger blokes feed off Cro and the way he goes about preparing for games.”

The Seagulls won their last Queensland title in 2012 and the players from that victory remain connected to the club along with all the Old Boys. Cronin said their support would be another boost on Sunday.

“They still come to most of the games and make a lot of noise and there is a past players bus that is already packed out,” Brideson said.

“They are a massive part of the club and a lot of them are still good mates with us. They will be out in force on Sunday making a lot of noise for us.”