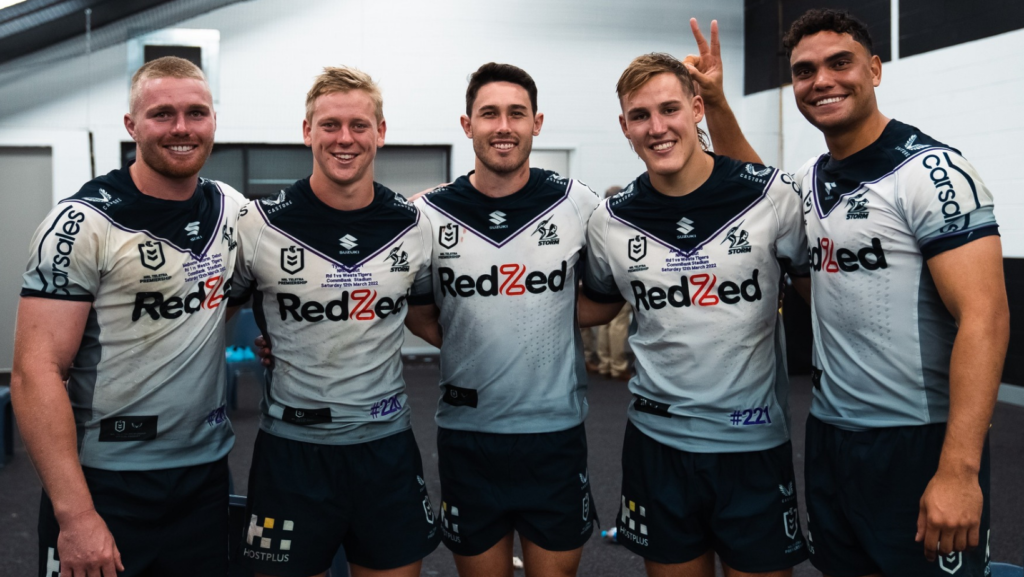 As the NRL returned for season 2022 last weekend, a number of former Wynnum Manly Seagulls players made their mark at the elite level.

19-year-old flyer Selwyn Cobbo continued his enormous form from the 2021 Intrust Super Cup Grand Final as he starred in the Broncos win over the Rabbitohs.

The former Gulls fullback ran for 152 metres and three tackle busts, as former greats of the game have anointed him a future superstar with State of Origin potential.

Broncos legend Darren Lockyer said: “Selwyn has a big body and a great attitude, so he’s one guy to watch for sure this season.

“I wouldn’t be surprised at all if Selwyn Cobbo plays Origin this year.”

Joining him in the victory at Suncorp Stadium last Friday night, were Wynnum Manly graduates Keenan Palasia and TC Robati, who both spent many years playing in the Seagulls Academy teams before becoming important cogs in the engine room at Red Hill.

The next night, Wynnum Manly’s 2021 Hastings Deering Colts U21s Player of the Year, Alec MacDonald made his debut for the Melbourne Storm.

“I was really confident in Alec [MacDonald] putting in the effort [Saturday night]. I know how fit he is, that’s his strength. But I’m not quite sure we have any more Alecs left,” said Bellamy.

Whilst they didn’t play, waiting in the wings for an NRL call-up after securing contracts in the off-season were Jayden Berrell and Delouise Hoeter.

The 2021 Petero Civoniceva medallist, Berrell, performed strongly in the trials for Cronulla and was named in their extended 24 man squad.

Berrell is committed and focussed as he eyes off an NRL debut.

“It’s been a long time and I’m probably in the best situation that I’ve been in in my career so a debut is the biggest (goal),” he said.

The former Gulls rake recently spoke passionately about his new perspective on life and drive for the game following the passing of his best mate and former Wynnum Manly captain Mitch Cronin.

Back at Red Hill, the ever consistent Hoeter was rewarded with a full-time NRL contract in the off-season after impressing during his trial-and-train opportunity.

Hoeter has been one of the best outside backs in the Hostplus Cup for the last seven seasons, and is ecstatic for the opportunity to don the famous Broncos jumper.

“I’m really appreciative and grateful for the Broncos being able to give me this opportunity that could be a big stepping stone to possibly getting back into the NRL,” he said.

Broncos Director of Football and Performance, Ben Ikin, said, “Delouise is a great example of why you should never give up on your dream. He came to the Broncos looking for a chance at 27 years of age and grabbed it with both hands. I’m excited to see what he brings in 2022.”

In total, twelve players from the Wynnum Manly Seagulls 2021 squad have secured NRL opportunities in 2022.

This huge number of graduates to the NRL is testament to the pathways focus at Wynnum Manly and commitment to player development.

With a number of the former Gulls turning heads in Round 1, it will be exciting to see which Wynnum Manly graduate will make their mark next this season.