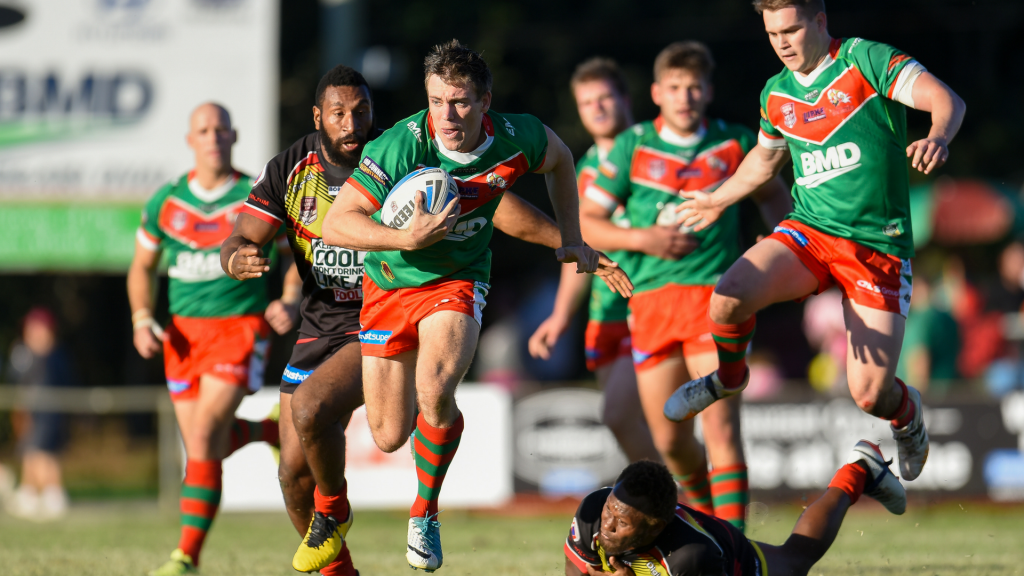 The PNG Hunters held on against a desperate Wynnum Manly Seagulls outfit to claim an 18-16 win to close out Round 10.

It was an entertaining game that had the result in the balance right until the end; but both coaches would have been lamenting the poor handling that continually gifted the opposition the ball.

In a seesawing game, it was the Hunters – thanks to a two-try effort from last year’s grand final champion Willie Minoga – who were able to prevail.

However, it was the Seagulls who started the game the better, with the Hunters kicking out on the full in the first set. Wynnum Manly went on the attack early and were able to score first when Pat Templeman skipped through the line to open the scoring. Shaun Nona was successful with his conversion and the home side were up 6-0 with just over 10 minutes gone in the match.

However, they conceded a penalty to help put the Hunters in a position to capitalise.

Passing from left to right; they then cut back inside and Minoga was through for his first try next to left posts. Ase Boas slotted the conversion to lock the scores at 6-6 with just under 20 left in the half.

After working their way back down the field, Wynnum were able to hit back soon after, with Mitch Cronin doing some cutting into the line of his own and he was over near the right uprights and they were back in the lead.

But in an end-to-end opening, a kick was chased through by Watson Boas who was able to get it down to score. Ase Boas again converted to again draw the teams level, this time 12-12.

There was more toing-and-froing between the teams with some strong defence on show throughout – forcing errors at either side of the field. Neither side were able to crack the line again and the teams went to the break with honours even.

It was an eventful start to the second half – but unfortunately for the Gulls, they gave up what proved to be a crucial penalty in front of the PNG line and Boas was able to put two more points on the board for his team in the 43rd minute.

Both side have been struggling of late, but there was no denying their effort to win – it was more their execution what was letting them down, and that showed in the game.

The Hunters were happy to play adventurous football; and made some busts through the line after putting in some chip kicks, but the Seagulls were up to the task in defence, shutting down danger.

After trying unsuccessfully in previous attacking raids to capitalise via their hand-hand side; the Gulls were finally rewarded in that area when Daniel Ogden went over to score and again put his side in front. However, Nona missed the conversion from out on the left touchline to remain 16-14.

The pressure however didn’t let up in the game, and with only four minutes left in the game; Minoga broke the hearts of the home side’s fans when he threw himself over the line to steal it after a knock on in front of the Gulls line handed over possession.

It was a frenetic final few moments to the game with the Gulls successfully collecting a short kick off before then dropping the ball to concede a scrum with 34 seconds left in the match.

Remarkably, the tension didn’t end there, as the Gulls were able to steal the ball back from the Hunters will the clock winding down, but a kick out to the left could not be collected and the Hunters hung on to claim the hard-fought win.