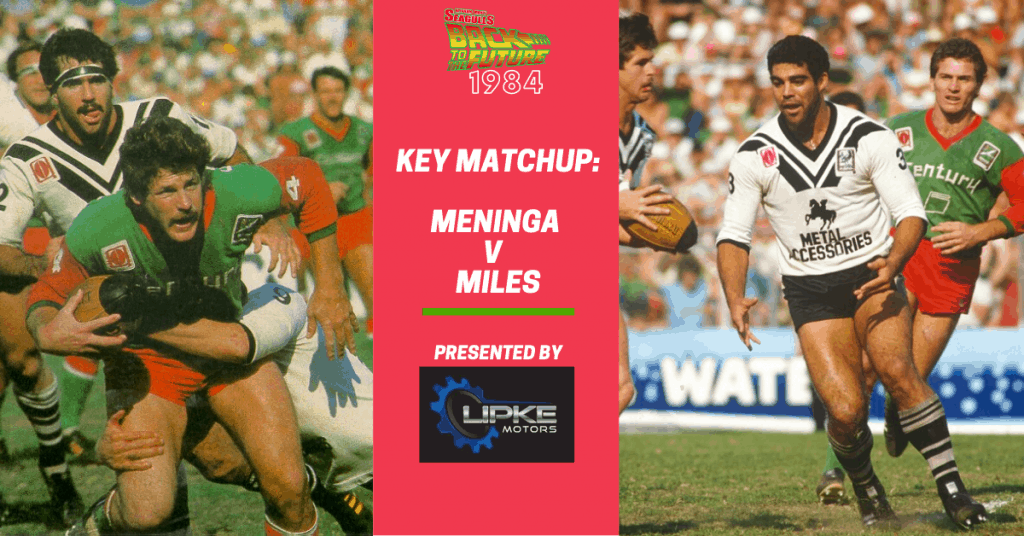 It is an all-star matchup in this week’s 1984 feature match. International centres Gene Miles (Seagulls) and Mal Meninga (Magpies).

Our Key Matchup is presented by Lipke Smash Repair who are still open for any job – big or small. Support Seagulls partners and local businesses. Contact via Lipke Facebook Page or (07) 3396 2229.

On the green and red side of the equation we have Gene Miles. An immensely powerful player, equally adept as a centre or the forwards, Miles was one of those who put back into the game almost as much as he got out of it and still works for FOGS association today.

There have been few greater sights on the playing field than Miles in full stride, holding off a would-be tackler and throwing his virtually patented one-handed pass to one of his team.

‘Geno’ played 92 games for the Wynnum Manly Seagulls, 72 for the Brisbane Broncos and 29 for Wigan Warriors in the UK. He also represented the Queensland Maroons 23 times and Australia on 14 occasions and is one of the great centres and players to come out of Queensland (and Wynnum).

Mal Meninga wrote in My Game, Your Game: ”Geno was my toughest opposition when it came to making the Test side. When Geno had the ball you had to make a concerted effort to tackle him. He was very quick for a big man, he had a step and if you did get to him he had a good off-load. His defence was strong and Geno was always willing to work hard to take pressure off other players”.

On the black and white side of the ledger is Souths, Canberra and Queensland great, Mal Meninga. Amassing a massive 517 first class games, Meninga is an all time great on the field and only extended his legacy as he coached the record breaking Queensland Maroons dynasty to a record 8 series wins in a row.

While there are stars across the park from both sides in the 1984 grand final, the match up of these two greats is one to savour.

Tune in to Seagulls Facebook from 1pm this Sunday and enjoy watching Miles and Meninga go round as the match is replayed in full.