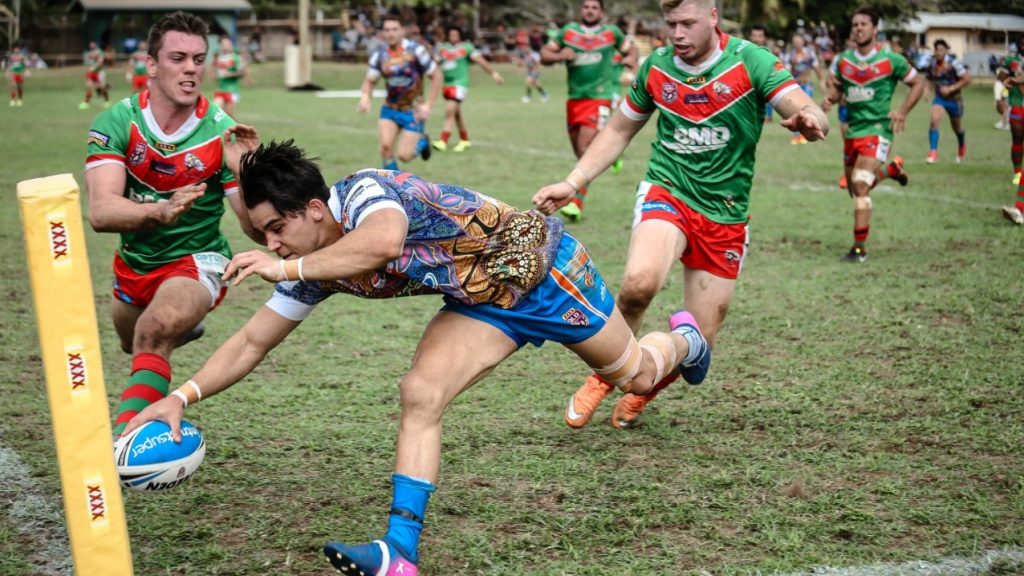 A strong first half set up the Northern Pride’s 40-16 domination of the Wynnum-Manly Seagulls on Cape York, ending an eight-game winless run.

Cape York communities aren’t known for their traffic jams, so when the 4WDs start spilling into the bush around the Yusia Ginau Oval carpark, you know the big show is in town.

A rare Intrust Super Cup game in the cape township of Bamaga, the first of County Week 2017, saw local fans fill the stands and field-side huts keen for a full day of footy. That’s exactly what they got, the day kicking off with the Northern Peninsula Area (NPA) Under-13s taking on the Zenadth Kes Rugby League Under-13s, and the Torres Stingers open men’s team getting home against the NPA Bulls.

But it was the classier footy of the Intrust Super Cup that the fans had come to see, and winless in their last eight games, that was just what the Northern Pride were keen to display, along with the Indigenous jersey they wore for the occasion.

Wynnum-Manly helped out with an early knock-on and penalty gifting the Pride field position and the Cairns team accepted the offer, with Brad Stephen crashing over from short range. Jordan Biondi-Odo added the extras to put the pride up 6-0.

The Pride were soon in again, halfback Jared Allen on the end of a 50-metre Shawn Bowen sideline burst. Biondi-Odo then used the wind to swing the conversion through the posts and the Pride were perfect at 12-0.

The Seagulls hit back quickly through Shaun Nona, but spoiled their good work with some poor left edge defence, allowing Brad Stephen to slice through 30 metres out and run away to score untouched. Biondi-Odo added the extras to extend the Pride’s lead to 18-4. A classy backline move then put Shawn Bowen in in the corner and on the knock of half-time a silly penalty deep in their own half added insult to injury for Wynnum-Manly. The Pride were more than happy to accept the two points and head to the sheds with a handy 24-4 advantage.

Wynnum-Manly added more starch to their defence in the second half, and after an initial softening up period put fullback Daniel Ogden away from close range next to the posts. Paora Kemp slotted the easiest of conversions to reduce the deficit to 14 and the Seagulls looked a chance.

With momentum building, an injury to Max Elliot broke the Seagulls’ concentration and the teams went tit-for-tat through tries to the Pride’s Marcus Jenson and Wynnum’s Peter Gubb.

The Pride did well to maintain their intensity though, and were always in control. Patrick Mago and Gideon Gela-Mosby got in on the act as the game wound down, the Northern Pride ending a horror run as 40-16 victors over the Wynnum-Manly Seagulls.

This story was originally published at:
http://www.qrl.com.au/news/2017/07/22/pride_end_horror_run.af_intrust-super-cup.html