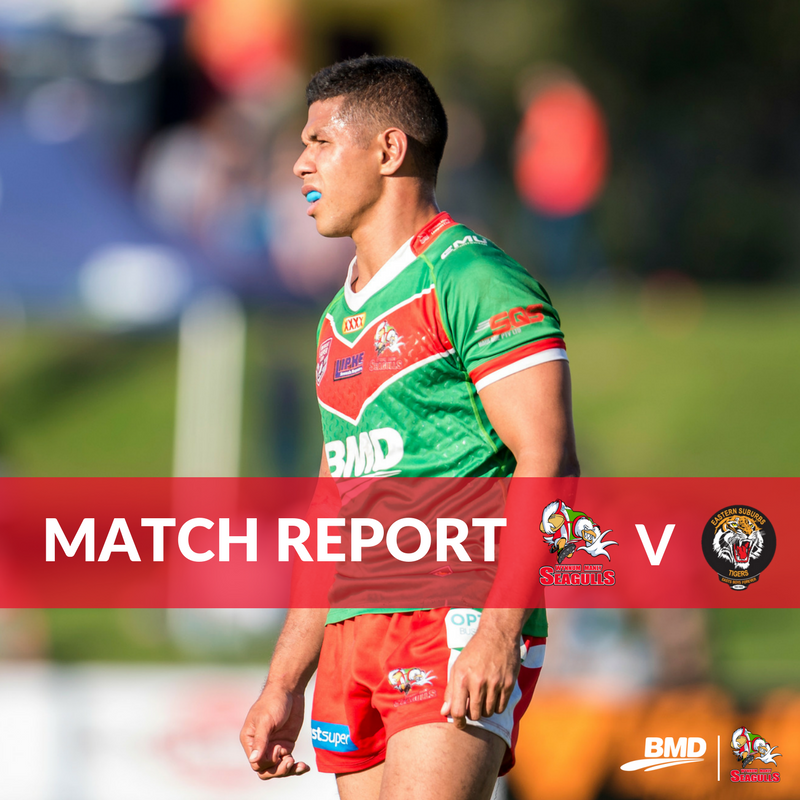 It was a strong start for the visitors however, who had little trouble venturing into Wynnum territory, threatening early.

But the following 20 minutes would be a sloppy period, errors abundant for both camps as neither could bring up points until the 24th minute.

Nona added the extras, marking the start of a strong Wynnum period for the rest of the half.

The first half closed nicely for the Seagulls, with the green and red run of play continuing when skipper Mitchell Frei regathered his own grubber to touch down four minutes out from the break.

Whilst the first half finished in favour of the home side, coach Adam Brideson lauded his side’s defence for standing strong against the abundance of early attacking Tiger possession.

“Nate Myles, Robbie Rochow, Young Tonu Tonumaipea; they dominated possession for a large chunk of that 25 minutes and yet we managed to turn them away,” Brideson said.

The Tigers eliminated the chance of being shut out for the first time this season early in the second half, Steven Thorpe busting over from short range in the 43rd minute, cashing in on a perfect Billy Walters delivery.

They looked dangerous again when Tonumaipea sliced through again a few sets later, which eventually resulted in a repeat set, before errors nullified more attacking opportunity for the Tigers.

This would be an unfortunate reoccurrence for Easts, who produced enterprising play without reward as they struggled to find execution throughout the second half.

Wynnum Manly didn’t fare much better throughout the bulk of the second half, but found a way to flick the switch in the final 10 minutes when Jeriah Goodrich collected the scraps of a Travis Burns bomb to light up the score board for Wynnum in the 74th minute.

Stedman Lefau put the contest to bed with a short-range score three minutes out, capping off a solid performance at home for the Seagulls.

“We turned up today,” Brideson said after the match.

“I know Easts will probably say they didn’t play very well today, but in my opinion, we didn’t really allow them to; we stuck it to a really good Easts side and showed a lot of commitment.”

The Seagulls are a longshot to make the finals, but play in hope against Burleigh next week, whilst the Tigers look to hold their top six position at home against Tweed Heads.