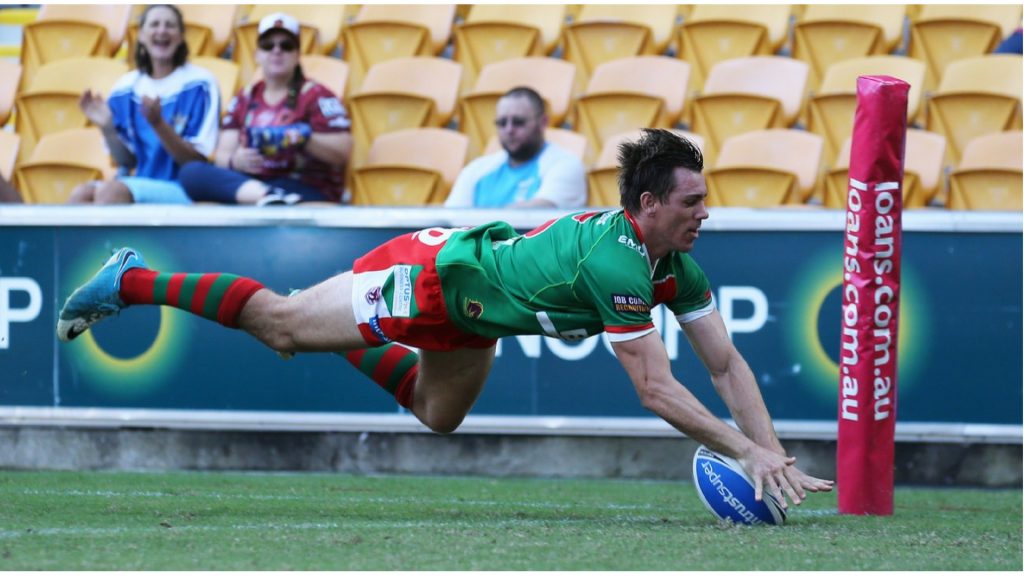 Like any other weekend, Daniel Ogden will lace up his boots and step onto BMD Kougari Oval.

However unlike any other, doing so will see Ogden join a revered fraternity, one that boasts such names as David Seage, Clayton Maher and Matthew Seamark.

Soon it will include Daniel Ogden, who will play his 100th game for the Wynnum Manly Seagulls this Sunday.

Almost poetically, he will be passing this milestone against the club that started the journey that lead him to donning the Seagulls colours on 100 occasions.

“I definitely remember my first game – it was my debut in Cup” Ogden reminisced, recalling an impressive four-try haul on his first Queensland Cup outing, a foreshadowing for the rugby league career ahead

“I got a bit lucky that day and got a bit of space” suggested a coy Ogden.

But luck could not be credited for the 149 tries to follow, with Daniel last year surpassing Seagull alumni Nathanael Barnes last year as the leading try-scorer in Queensland Cup’s 23 year history.

That magical try however, would not come easy.

After levelling Barnes’ record in round 20, it wouldn’t be until five rounds later in the very last game of the season, coincidentally against his former club that Ogden would crossover for the try that set him atop the rest.

“It was the last game of the year and the boys had been giving me a bit of stick for not crossing the line, so it suppose it was good to cross the line before the season ended” joked Ogden.

“But it’s (scoring tries) not something I think about before a game” explained the competitions leading try-scorer,

Be that as it may, Ogden’s “do my job” mentality has culminated into a whopping 153 tries over a 10 year career, 76 of which for the club he will run out for on Sunday.

Whilst soon joining the Seagulls 100 club, Ogden joined a club as exclusive as one can get back in Round 17, planting a hand on a grubber that marked his 150th Intrust Super Cup try, the first player to do so.

An unbelievable feat for a player who barely expected to score at all.

“I was never that good as a kid, so to even have played one game and score one try is amazing to me” admitted Ogden.

Ogden’s 17 tries in 2018 sits him at 76 for the Seagulls, placing him in-between fellow Hundred-Game-‘Gulls Simon Phillips (66) and Luke Dalziel-Don (82) with a whiskers chance of besting Wynnum Manly’s all-time leader David Seage (83) by season’s end.

Whilst seven tries in three games seems highly unlikely, Ogden’s proven to be a fan of late-season heroics and starting with a try or two on his 100th Seagulls game would certainly lead to an exciting chase home.

Tries or no tries however, raising the bat for Wynnum Manly is an achievement Ogden holds in high regard.

“It means a lot” said Ogden.