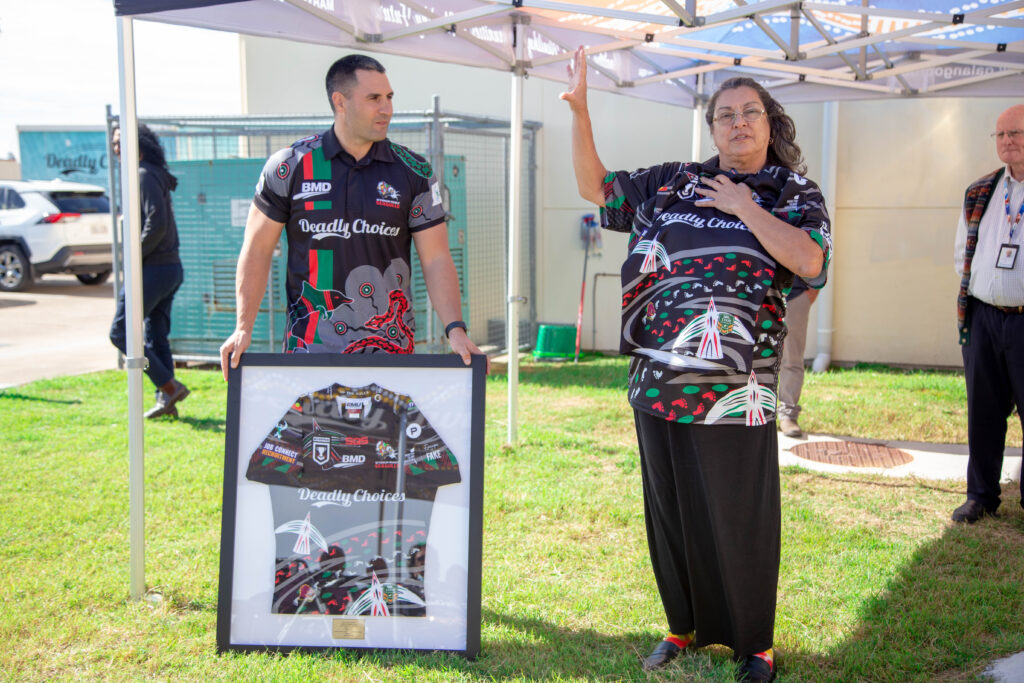 The BMD Wynnum Manly Seagulls are proud to share the story behind the Indigenous jersey that we wore on Saturday 18 June in Hervey Bay.

The jersey was revealed at a morning tea the day before the game at the Galangoor Duwalami Primary Healthcare centre.

Local Indigenous Elders, Deadly Choices staff and ambassadors, and Seagulls staff were present to share in the excitement of the Seagulls trip to Hervey Bay.

Aunty Karen Hall spoke first about the jersey that she designed so lovingly.

The eagles on the jersey represent the coming together of many people as one, signifying the eagle as a symbol that we all look upto in the sky.

The red footsteps represent the people that have travelled across country, and up and down the football field.

The red and green colours on the jersey emulate those of the Wynnum Manly Seagulls.

The Aboriginal and Torres Strait Island flags are located on each shoulder, with Deadly Choices front and centre on the jersey to represent their significant contribution to the organisation of this Indigenous recognition match.

The Seagulls then attended a team dinner, hosted by Galangoor Duwalami at the Hervey Bay Boat Club, where Aunty Karen Hall spoke to the players about the design of the jersey and what this match means for the local Indigenous community.

The Seagulls staff and players are incredibly excited to be involved in a match such as this, and wore this Indigenous jersey with immense pride.

As a cherry on top of an already successful weekend, the Seagulls won both their Hastings Deering Colts and Hostplus Cup matches.