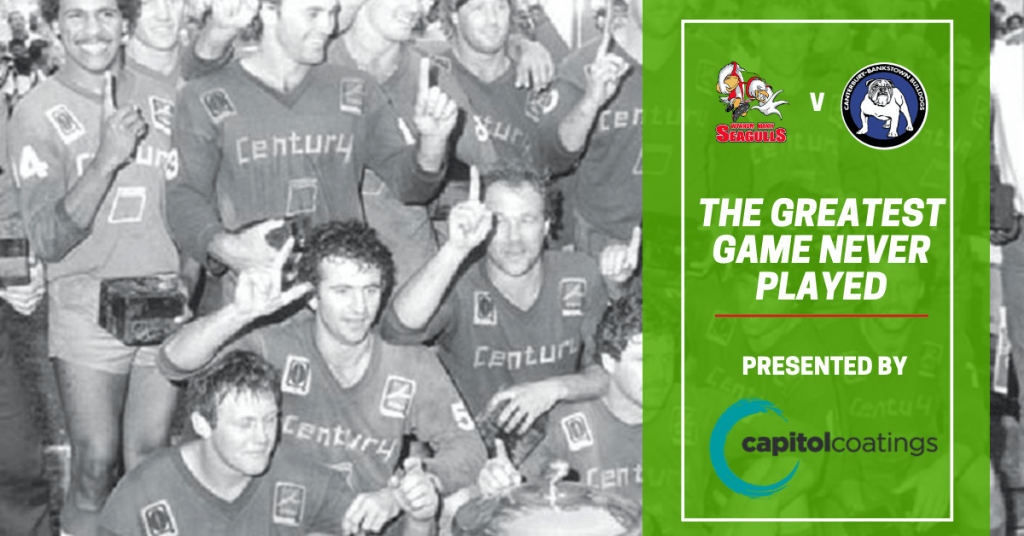 Tony Webeck (nrl.com) – Talk to folk up north and they reckon it was the New South Wales Rugby League running scared.

In the days when the NSWRL and Brisbane Rugby League competitions operated independently of each other and players only ever crossed paths at State of Origin time, the general consensus was always that Sydney was the premier – and stronger – competition.

But this was different.

In 1984 the team assembled by Wynnum Manly has come to be considered one of the greatest Brisbane club sides to ever take the field, and they wanted to prove they were better than the best Sydney could muster.

In the modern era the premiers of the Intrust Super Cup take on the NSW Cup champions in the NRL State Championship Final, but 30 years ago two of the greatest club sides Australia has ever seen had agreed to duke it out before the hierarchy down south stepped in.

The Wynnum Manly team that defeated a Southern Suburbs side coached by Wayne Bennett and boasting names such as Belcher, Meninga, Jackson, Lindner in the 1984 BRL Grand Final was laden with state and national representatives.

Wally Lewis – at the absolute height of his powers – captained a Kangaroos team that year that also included Seagulls teammates Gene Miles and Greg Dowling and which contained BRL stars Mal Meninga, Mark Murray, Bryan Niebling and Greg Conescu as the player power base subtly shifted to Queensland.

Australia won that Ashes Series against Great Britain 3-0 and Queensland won the Origin Series 2-1 with only a handful of Sydney-based players in the Maroons squad so when Wynnum won the 1984 BRL Grand Final in a record 42-8 scoreline the locals began to wonder: Could this team beat the champion Sydney team from Canterbury-Bankstown?

“Not too many people gave us any chance of beating the Sydney premiers in any competition but that one, that was something different,” remembers Wally Lewis. “That was a team that was as good as any club team that I ever played in in Brisbane that’s for sure.

“The suggestion was that we’d never beat the teams from NSW but it was always a burning question for a lot of people and I was one of those blokes. While we used to respect the consistency and the level displayed in Sydney there was always that wonder in the back of your mind: Could we do it? Would we do it?

“The fuse had been lit at State of Origin level and we probably expected that if we were given a chance perhaps we could beat them. I can honestly say that in the back of my mind I used to think, I reckon we would be a chance of beating them.”

The concept of a state playoff was believed to have been hatched by a Brisbane journalist about a month prior to the Brisbane grand final and soon gathered momentum, Wynnum’s sponsor of the time, Peter McKenna from Century Air Conditioning, backing the proposal wherever it was played.

Such was the interest in who would come out on top that when it became clear that the game would not go ahead, officials in Queensland staged a computerised match-up of the two teams, complete with a call by legendary caller John McCoy.

“It was at the height of the Brisbane Rugby League competition and everyone was so interested in how they would have gone. I remember people sitting around the radio listening to this pretend game that Wynnum Manly won 32-28,” recalls Wynnum Manly historian Paul Comber.

“We believed that our team was just as strong if not stronger than Canterbury. We knew what was going on down there whereas they knew bugger all about what was happening in Brisbane.”

“We didn’t care whether we played it in Brisbane or in Sydney. Naturally we backed ourselves but we wanted to see how good we were,” Greg Dowling tells NRL.com.

“That Canterbury side was a beauty, it was. It was chock full of international and representative players and a tough forward pack.

“In our team there was Wally, myself, Gary Coyne, Gene Miles, Colin Scott, Terry Butler, Ian French, Brett French who all played State of Origin out of the side and throw in Warren Green who played for Queensland Residents… We had Brian Walsh, Terry Saunders and throw in a couple of other guys like Tony Kajewski and Mark Zillman, it was a bloody good side.

“They were keen, we were keen and it’s a pity it never went ahead because when you look back on it now, our team was one of the best attacking teams Queensland had seen for a long time and you had the defensive side of the Bulldogs coached by Warren Ryan so it would have been a good clash.

“It’s a pity they never let it happen, we had sponsors and everything ready to go. People were climbing on board for it but the NSWRL, they knocked it on the head, they didn’t want it.”

But if the suggestion is that the NSWRL were the roadblock, Canterbury prop Peter Tunks said the Bulldogs players and officials were just as keen to make the game happen as their northern rivals.

“There was talk in the media about it and we were keen to play it because they obviously had a pretty good side with Wally, Gene Miles, Greg Dowling but we loved playing anybody back in those days,” Tunks said.

“We knew that it was a decent comp in Brisbane but we obviously didn’t think it was as strong as the Sydney comp because this was the be-all and end-all.

“At Canterbury, we really loved a challenge and we would have loved the opportunity of going up against a team full of great players like they had. It’s like anything, to be the best you have to beat the best and that was our attitude but unfortunately it didn’t come off. I don’t know where we were supposed to play but it would have been good fun.”