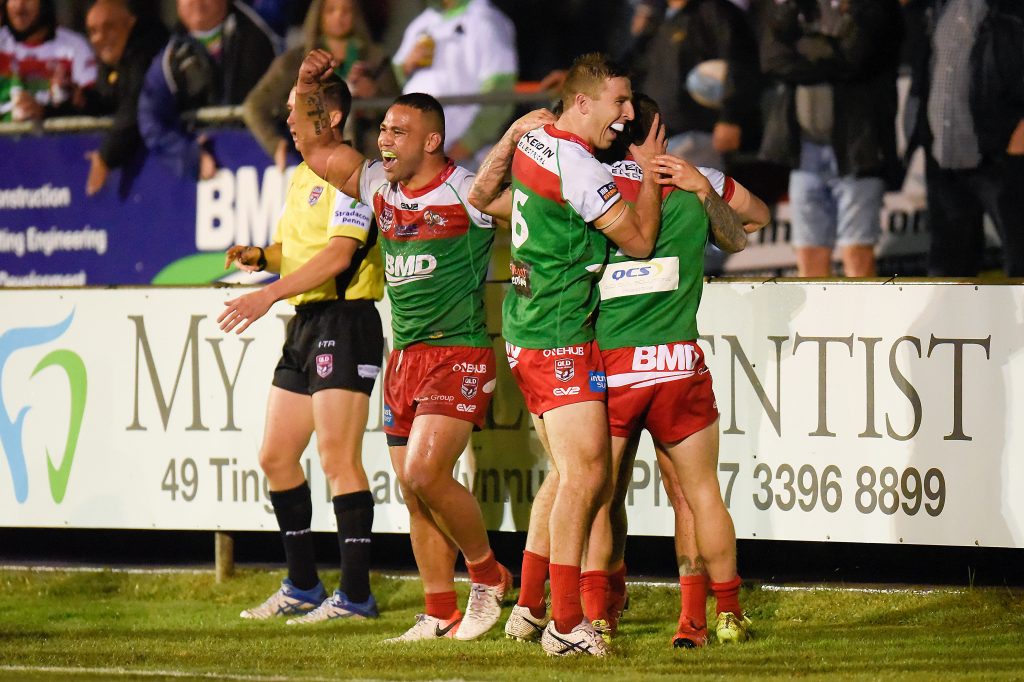 The Wynnum Manly Seagulls have bounced back after their third loss of the season a fortnight ago to the then undefeated Sunshine Coast Falcons.

A pair of tries to fill-in fullback Matt Milson headlined the offensive onslaught by the Seagulls, with a 22-point unanswered first half creating enough distance for them to fend off the attempted second half heroics by the visiting Central Queensland Capras.

Capras would could come close to striking first, looking dangerous as they played confidently – offloading almost recklessly throughout the early minutes as they asked many questions of the Seagulls’ defence.

They would struggle to land the striking blow on any of these opportunities however, and not long after, the Seagulls would eventually make them pay.

Backrower Matiu Love-Henry made his presence felt after a week off and made many incisive runs along with the rest of Seagulls around the 10-minute mark.

This would eventually culminate in the first try of the game as Milson would enjoy the decoy services of Love-Henry before dancing past the last defender for his first try in the Intrust Super Cup.

“Matty’s been doing a very good job in reserve grade and has been patiently waiting for his opportunity and I’m really happy he came away with two tries tonight and a really good performance.”

Capras would return the game to a wrestle, a big Nathan Bassani hit a highlight late in the half, but a lack of polish on the back end of sets continued to mount pressure.

Seagulls winger Ed Burns would only double down on their woes when he shot off his wing, forcing an spilt ball during a Capras set play down the right, which allowed Patrick Templeman to scoop and score after a 60-metre dash.

A damaging double to Kalolo Saitua in quick succession (29th and 32nd minutes) took the scoreline out to 22-0 by halftime, with the Capras only a forward pass away from avoiding the goose-egg on their end of the scoreboard as the first half came to a close.

As the old adage goes, the Capras needed to be the first to score, and that they did.

Taking advantage of a Jordan Drew knock-on close to the line, centre BJ Aufaga-Toomaga would run a perfect line off a short pass from prop forward Edward Pettybourne and spark some hope for the visitors.

The Capras would lift their game enough to present themselves with more opportunities at the Seagulls’ line but the Seagulls found the switch following the first try and repelled Central Queensland’s ensuing attacks.

Off the back of some tough defence, Brideson unleashed a few of his quick men on the field, resulting in the return fire for the Seagulls as utility Jayden Berrell, half Sam Scarlett and fullback Milson linked up beautifully, tearing down the middle of the park to eventually score Milson’s second.

Jordan Drew would eventually finish off a quick try off a Capras error four minutes later and that would be enough to put the game to bed as both teams struggled with ball control toward the back end.

Late tries to Joshua Johnston and Aufaga-Toomaga would serve as consolations to the Capras, as the game would finish reading 34 – 16 to the Seagulls.

The Capras take on the Easts Tigers back at Browne Park next week.

The Seagulls remain home for a ‘Flockbuster’ with the Tweed Seagulls in their Members Round at BMD Kougari Oval.