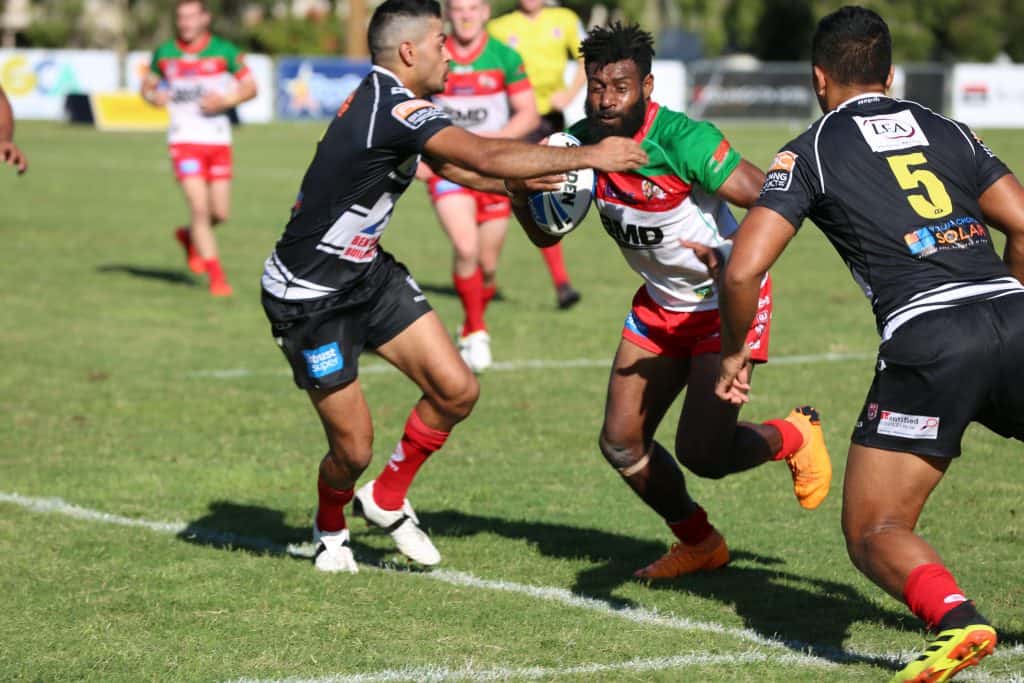 Played in picture-perfect conditions at Piggabeen Sports Complex, it was an even start from both teams who were content to just get through their sets early.

However, the visiting Gulls were first on the board in the 11th minute when a hard-running Matiu Love-Henry made his way over after some crafty lead-up play from halfback Sam Scarlett and hooker Mitch Cronin.

Scarlett – who was upstaged last weekend by debutant halfback Tom Dearden – was heavily involved throughout the afternoon to help steer his side to victory.

Wynnum Manly pushed further in front – firstly by a Dearden penalty goal in the 23rd minute then an impressive team try finished by Ed Burns only moments later.

Tweed left a high kick from former junior Tweed Seagull Dearden bounce and they lived to regret it, with Wynnum flying high and tap it back inside for Burns who was there to collect it and run in to score.

After some exciting back-and-forth that also featured fumbled balls and breakaway runs; Wynnum Manly looked to end the half as it began; with a big man crashing over for a try – this time the Broncos-contracted forward Keenan Palasia.

However, that wasn’t the end of the point-scoring for the side.

Tweed kicked out on the full just before the halftime siren sounded; leading Dearden to opt to take the two from halfway. He was successful and Wynnum Manly had an 18-0 lead at halftime.

The home side tried hard in the second half and started with intent; coming close when they fell just short with a crash and barge attempt, then lost the ball over the line when they went out wide.

While the effort was there, the execution was not, with stanch Wynnum Manly defence coupled with the self-inflicted wounds of poor handling and giving up the ball through with incorrect play-the-balls proving too much to overcome.

They did get on the board in the 67th minute thanks to the speed out wide of Treymain Spry who sprinted from his 20m line after fullback Taylor Walters found his man with clever pass.

But that was the only high point for the home fans; with Wynnum Manly crossing for three second half tries to round out a comprehensive performance.

Next week, Wynnum Manly will again travel to the Gold Coast to take on Burleigh on Saturday; while Tweed will face an improving Mackay Cutters side at BB Print Stadium that night.

Original Source: “Wynnum Take The Chips Over Tweed in ‘Flockbuster’ “