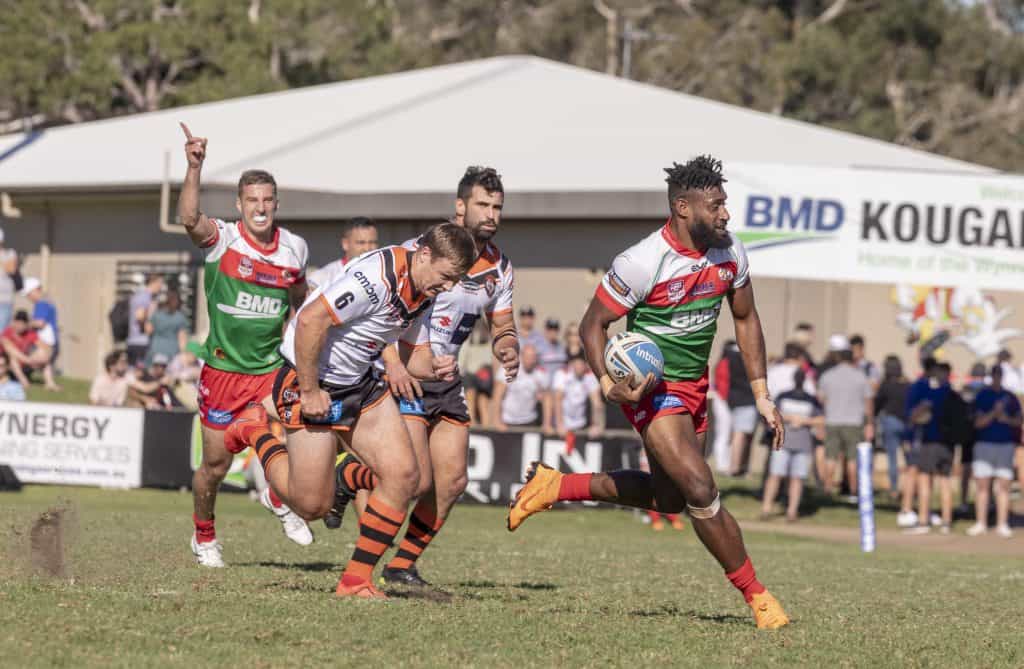 With two top four teams in action, it was set to be a good game when Wynnum Manly Seagulls hosted the East tigers at BMD Kougari Oval.

Both sides were on a high and looking to consolidate their position in the top four after posting Round 8 wins.

The Seagulls, after a shaky start, went on to dominate the match picking up a 38-22 win highlighted by doubles to Edene Gebbie and Ed Burns.

However, it was the Tigers who started the better with two tries inside the first 20 minutes.

The first game through Curtis Dansey Smaller which was followed 10 minutes later by a try to Brett Greinke from some fine front rower passing through Sam Lavea. The Tigers led 12-0 after 18 minutes.

It didn’t take long after that for the Seagulls to hit back, with Edene Gebbie (who leads the league in tackle busts) tallying up another splitting the defence through the middle and scoring under the posts.

Minutes later, winger Kennar scored off a pin-point Scarlett kick and Pat Templeman made no mistake with the conversion. The scores were then at 12-12.

The Seagulls went onto to dominate field possession in the later stages of the first half, but it was Tigers winger Dansey Smaller who scored a much needed try for the Tigers and showing the crowd he has speed to burn, out running Ed Burns to score.

That try ensured the Tigers went into the break with 16-12 lead.

From there, the Seagulls found their attacking mojo Burns scored his double in the space of 10 minutes, the second of which was a spectacular winger’s effort.

He managed to do a full 360 whilst doing so, which forced most of his body over the sideline but in the air; he slammed the ball down in the corner to have the Seagulls ahead 26-16.

The spectacular solo efforts weren’t finished as super sub Jayden Berrell had the ball inside the 20-metre mark and managed to step off his right twice beating three Tigers defenders and raced through a gaping hole to score next to the posts.

Then over to that man Gebbie to seal it for the Gulls.

Handed the ball on his own 50-metre line, the elusive fullback took it upon himself to take on the Tigers defensive line and once he poked his nose through, there was no stopping him with the try line in sight. After sprinting down to score his double, he celebrated right in front of a packed-out Chook Pen.

Tigers winger Tom Kenny went on to score a late intercept try, although the Seagulls had already done enough it finished 38-22.

In Round 10 (in a fortnight), the Seagulls travel across to PNG to play the Hunters next Sunday.

The Tigers will play an inform Tweed Seagulls on the Saturday.