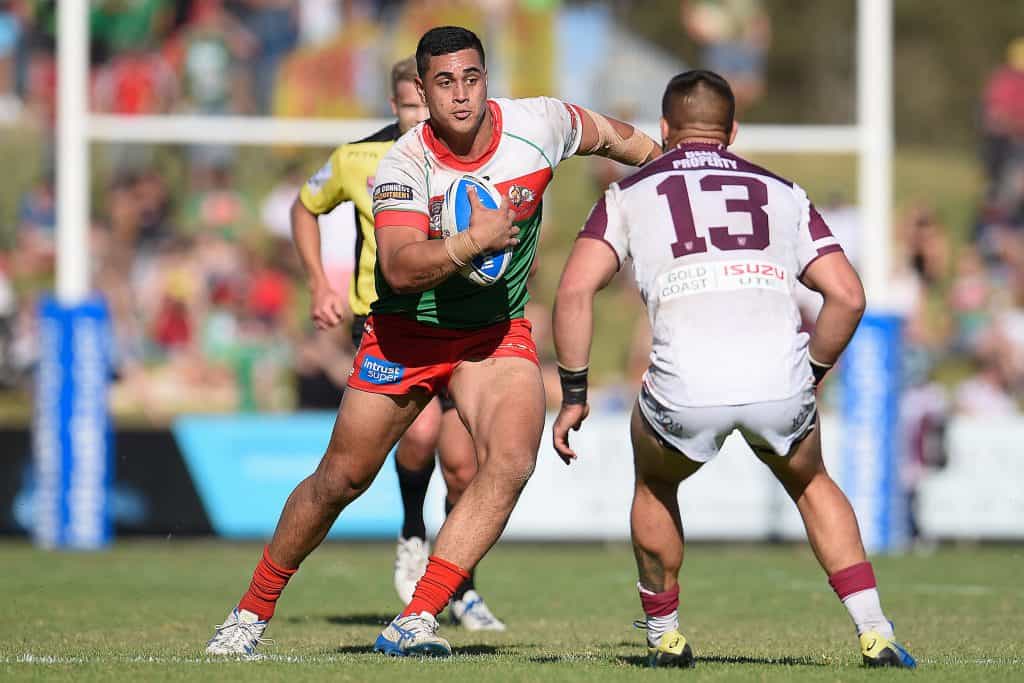 Keenan Palasia is determined. Determined to run out for the Brisbane Broncos again after his third knee surgery, determined to set himself up for the future through education, determined to make his parents proud.

The 22-year-old developed his love of rugby league at Parkwood Sharks after, at age 10, missing the sign-on days for rugby union and basketball.

“I am a strong believer everything happens for a reason,” Palasia’s mum Carly Wallace said.

It is that love of rugby league that drives him to keep striving to “be more than a two-game player”.

Palasia had a train and trial contract at the start of 2019 but did not initially gain an NRL contract.

After starring for Wynnum Manly Seagulls in the Intrust Super Cup and being selected for the Queensland Residents, Palasia secured a deal with Brisbane and is part of their top 30 squad for 2020.

The young gun made his Broncos debut against the Cronulla Sharks – a club his uncle Ricky Leutele played at for years before joining the Toronto Wolfpack – in Round 16 and he ran out again against Gold Coast Titans in Round 19.

But Palasia hit a heartbreaking hurdle last month, injuring his left knee during training and undergoing surgery – his “fifth or sixth” – two weeks ago.

“It was just a crap accident. I stepped off my left foot and it just blew out on me, which is the same way I did it the last time a few years ago… same leg too,” Palasia said.

“Straight away I knew it was my ACL. I heard the pop and couldn’t really walk so I just played the ball and walked straight off the field. Then I got looked after by the physios.

“I’ve had surgery on my hand, my ankle and that was my third knee surgery… I haven’t had a good run. This was my second knee reconstruction on my left knee.

“The older players who have had a fair few injuries have told me is that it’s just part of the game – to keep my head up. It’s not the worst thing that could happen and there’s more to life than footy.”

Palasia, who lives on Brisbane’s northside with Broncos team mate Thomas Flegler and Rory Ferguson, said he was getting stuck in to his rehab, determined to overcome the injury.

“It’s a nine-month recovery so I could’ve been back at the back end of the season or midway through, but I’ve decided to have the whole year off and prepare for the 2021 season,” Palasia said.

“I’ll hopefully get fit, get my body sorted. Not just my knee, my whole body, and prepare for that season.

“The Broncos are good. This isn’t the first time they’ve looked after me with surgery. They all know all my injuries, so they know how to look after me. They know how I train. It’s nothing new to them or me.

“When I can bend my knee again I’ll be on that bike like no tomorrow and doing upper body weights, then trying to get my knees right.

Palasia, who grew up idolising Sonny-Bill Williams, said he drew his strength, during this time of adversity, from his “strong support group”.

“I’ve got my family. They’re always behind me. I’ve had my little brother Saiah doing everything for me,” Palasia said.

“Footy wise, I just want to focus on my rehab and get back for the 2021 season. And outside of footy I’m enrolling into a degree in social work – I’ll study that part-time and use all the time I’m going to have not playing doing that.

“I worked in the NRL State of Mind program – I loved that and I enjoyed that, so I want to get back into some form of that work, helping in the rugby league community. Mentoring and being able to give back.”

Palasia said it was his parents who inspired him to always do better.

“I’ve had it hard in footy and they’ve had it hard in life… I think that’s where I got it from in my footy career. That even if things get hard, not to give up and keep trying to get what I started playing the game for,” Palasia said.

Palasia, part of the Broncos injury crew that also includes Sean O’Sullivan, who had the same surgery as Palasia, said he would still attend most Broncos and Wynnum-Manly home games, “just to get behind everyone”.

Palasia said he was particularly keen to see Wynnum-Manly “go one step further than we did this year… hopefully win”.

“I don’t remember most of this year’s game. Got knocked out about 20 minutes in,” Palasia said.

“I didn’t feel good at all – purely because I felt like I let the team down, only getting through 20 minutes and I couldn’t get back on the field to help them. But I watched the game and they all dug their heels in and had a crack so I couldn’t be prouder.”

Wallace, who was chuffed to get a kiss from Palasia as he ran out of the tunnel for his NRL debut, said she was “very proud” of how her son had handled the situation and proud of his outlook.

“Obviously prior to injury it would’ve been good to get him as part of that top 17 with the Broncos, just because of the sacrifices he has made and the hard work – that would’ve been just reward,” Wallace said.

“But given that that’s off the cards at the moment, I am excited for the fact that he has enrolled into uni and is aiming to work with people and children and the community – it is something he’s always been really, really good at.

“I think because of his nature – he’s modest, humble, I think it’s a really good fit for him. It also gives him something positive to think about and focus on.

“I understand he’s obviously going to be heavily involved with the club as well, and I know it’s going to be a little bit of a roller coaster for him, but we all support him 100 per cent in everything he does.

“I’m a strong believer everything happens for a reason. So I think this is one of those things, whilst the injury itself is not a good thing and it does have an adverse affect on his career at the moment, I do think the fact that he’s looking at focusing on something else is going to benefit him in the long term.”

Wallace said, as a mum, it had been “absolutely heartbreaking” to watch spanner after spanner thrown in the works for Palasia.

“Especially knowing what he goes through and what our whole family goes through with it all… seeing him – not just the physical, because all of the professionals around him to get him back to where he needs to be physically, but watching the mental side at times is tough,” Wallace said.

“But this time around he has been very positive, which has been great to see, and very proactive, which is amazing. I am extremely proud.

“His younger brother, who has never really looked up to his brother – he is his brother and he loves him, but he’s never really aspired to be like him, has had a change of heart and put his hand up to be Keenan’s nurse during this period. Cooks and cleans for him.

“Funnily enough, about a week ago I asked him who his idol was, who he wanted to aspire to be like, and he mentioned Keenan, which is really awesome. I nearly cried. He said ‘don’t tell him though – he’ll get a big head’.

“Watching his brother, knowing it’s not all smooth sailing. Keenan’s not one of these players that gets through without injury. His brother has seen his struggle and probably admires him a little bit more for it as well.

“Obviously things happening throughout his career, going off contract, regaining a contract – all these little milestones, have been a great thing – not just for his little brother, but for all of us, to watch.

“I understand most people probably would’ve given up a long time ago. I have to admit I’ve probably said that a couple of times. But that’s the mum mode in me. The competitor in me though is right behind him, hoping he sees it through, and I don’t think he’ll ever give up on it until he literally breaks.

“We offer the support we can – whether it’s mental, emotional, physical, because like any parent we just want them to be the best they can be. Whether that’s at sport or just in life in general.

“My ultimate goal for him is to be happy.”