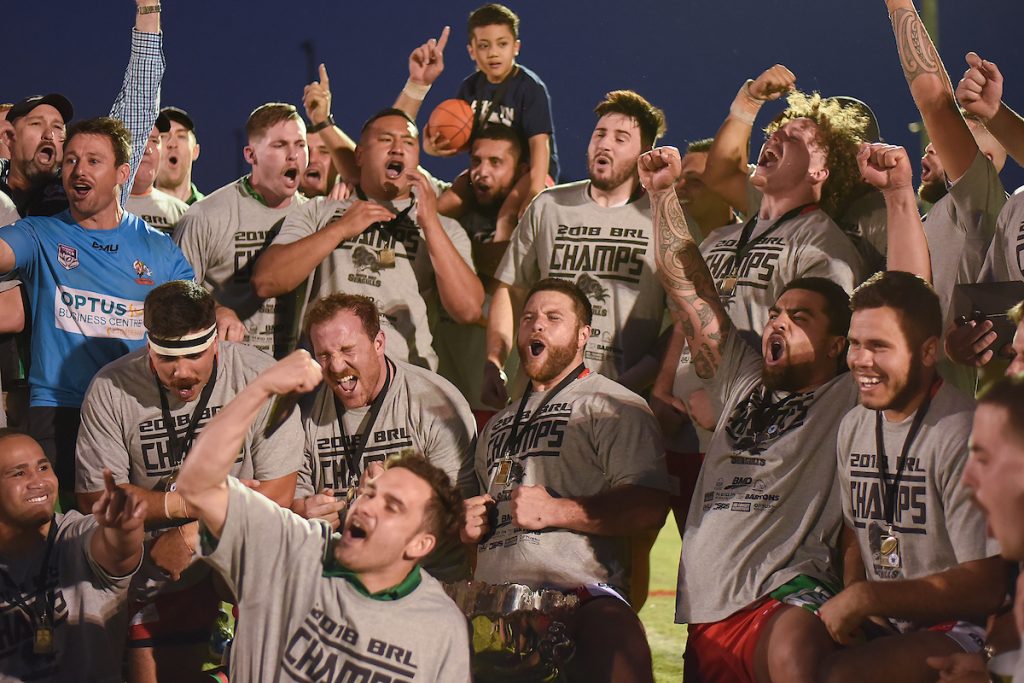 After a hard-fought – and at times, frantic – 80 minutes, it was the Seagulls who were singing their team victory song after holding out the Redcliffe Dolphins 28-20 to claim the BRL A Grade In Safe Hands Cup title.

While it was a successful return to grand final day for the Seagulls who lost the inaugural decider in the re-vamped competition in 2015 to the Ipswich Jets; Redcliffe have had to ensure back-to-back defeats in the final game of the season after losing out to Valleys last year.

The Dolphins were on the back foot from the start of the game; with the Seagulls able to apply pressure early and spend much of the opening half camped in their half to attack their line.

The kicking game from the Gulls caused all sorts of issues for the Phins outside backs; with dropped balls giving Wynnum Manly plenty of opportunity to attack.

The opening points of the afternoon were scored as the Gulls won a scrum mid-way through the half in good position; with fullback Matthew Milson the one to go over for his side. Skipper John Te Reo successfully slotted the conversion for a 6-0 lead.

More errors continued to build from both teams late on the half; but it was the Phins who would pay the price again.

And after applying some sustained pressure on the Dolphins line; the Seagulls were in again after an opportunistic dive from dummy half Kalolo Saitaua was successful. The Phins had just put a halt to a similar attempt the play before and were not expecting another quick lunge at the line.

Trailing 12-0 with six minutes to go to the break, there was finally some joy for the Dolphins fans – which included most members of the Intrust Super Cup squad who will play in their grand final next Sunday – with winger Will Partridge dotting down for the first of his three tries for the afternoon after he proved too speedy down the left side line after chasing through on a kick.

Scores remained at 12-4 until the break, but the number of players on the field was diminished; with both sides each losing one player to the sin bin after a fiery exchange with five minutes left in the half.

The Dolphins came into the second half with a renewed vigour and their speed up the middle of the field was rewarded with Partridge’s second try, sparked by a break from Sheldon Pitama.

The conversion missed and the minor premiers trailed 12-8 early in the second half with plenty of time left to play.

However, another error invited the Gulls back into attacking position and after a short delay in play for an injury; Wynnum Manly were able to refocus instantly with Kelly Tate sneaking over to the left of the uprights for an 8-16 lead with 29 to go.

They were in again soon after when Junior Pita burrowed his way to the line. Another successful conversion from Te Reo had his side up 22-8 and with one hand on the cup with only 16 minutes left to play.

However, the Dolphins were able to flip the script almost instantly with Partridge again finding room down the left-hand side to run in for his third try. Reece Braun’s successful conversion from the left-hand touchline was a success for a 22-14 scoreline.

Both sides upped their intensity in the next passage of play knowing what was on the line; but a conceded penalty by Wynnum Manly saw Redcliffe on the attack and they narrowed the scores again with forward Agassi Stowers running a good line to latch onto a pass and cut back inside and straight through under the posts to score.Braun slotted the kick and Wynnum’s lead was slashed to 22-20 with eight minutes remaining and it felt like the tide could be turning in Redcliffe’s favour.But their work was undone by a brutal bit of Wynnum defence with a Josh Hoffman hit jolting the ball free from Redcliffe as they were bringing it back from kick off; effectively killing off their surge.
The final four minutes saw both teams force errors with some high-energy, in-your-face play. But in the end, the Gulls had the final say when with under a minute to go, Milson was over for his second try after a high kick ahead was collected by the Gulls and fling inside to the supporting fullback after a strong carry forward, with Milson diving over to seal the win.