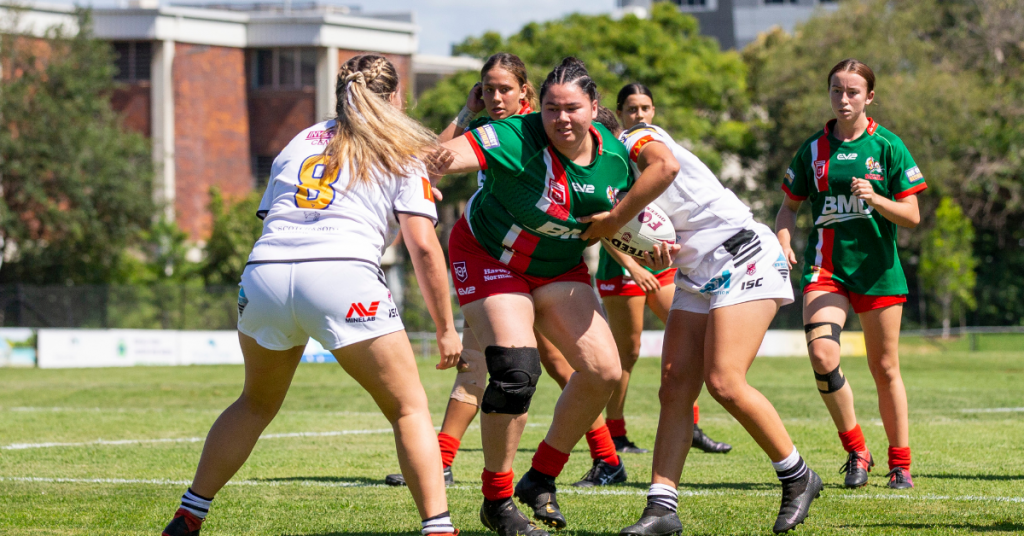 The Seagulls had a strong first game of the season, scoring eight tries against Souths Logan on Sunday 14th March at Davies Park in the Harvey Norman U19s.

Chelsea Campbell scored the first try for the Seagulls 9 minutes into the match off a dropped ball error from Souths.

Souths fought back quickly with a try from Rialey Baty (14’). A successful conversion to by Charmayne Pakura (15’) put Souths in the front with the score 4-6.

Emma Barnes (23’) responded for the Seagulls with a try from dummy half, before Raven Tihema-Mako followed with a successful conversion bringing the score to 10-6.

Jayda Lofipo went over in the 28th minute and Raven Tihema-Mako once again converted (29’) to take the half time score to 16-6.

Emma Barnes scoring in the 23rd minute for the Seagulls

The Seagulls started strong in the second half with Jayde Herdegen slicing through the line to find Barnes (32′), who scored next to the posts.

Helen Uitulagi secured the Seagulls fifth try soon after in the 34th minute.

The conversion was successful by Raven Tihema-Mako bringing the score to 26-6.

A Souths error then allowed for Sierra Maple (38′) to secure another 4 points for the Seagulls.

In the 48th minute, Chelsea Campbell made a line break and took the Seagulls over the line for another try to extend the lead 34-6.

On the back of a penalty, Seagulls’ Sierra Maple went over for her second try of the match in the 52nd minute.

Souths went over in the dying minutes with a try in the right hand corner, bringing the final score to 38-10.